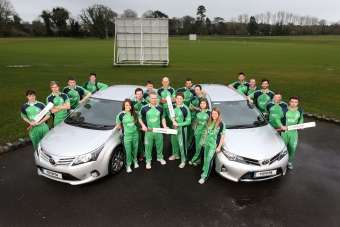 Toyota Ireland has announced that it has become the new Official Car Sponsor to Cricket Ireland.

The three year deal will see Toyota providing a fleet of vehicles to Cricket Ireland including the Avensis and the Auris, to support the operational and business needs of Cricket Ireland, and to also support the strategic development programme for the sport in Ireland.

Commenting on today’s announcement, Ian Corbett, Marketing Operations Manager for Toyota Ireland said, “We, at Toyota Ireland, are delighted to announce this sponsorship with Cricket Ireland.  Cricket Ireland has emerged as a top class professional sporting organisation.  Its strategic plan to 2015 is ambitious and focused and we look forward to supporting their efforts to grow and strengthen the game in Ireland.

Our aim is to support cricket at elite level in Ireland’s drive towards qualification to future World Cups but also at grassroots where the cricket development programme is increasing participation in the sport right across Ireland.”

Also commenting Dennis Cousins, Head of Commercial, Cricket Ireland said:
“Cricket Ireland are delighted to welcome Toyota on board as our new Official Car Sponsor.  Toyota’s national presence and popularity supports our plans to build on the increased levels of interest, participation and coverage of cricket throughout Ireland.  We are excited about this new relationship which brings together two organizations who have great heritage in Ireland, and who are both committed to continuous improvement and excellence with equally matched high ambitions. We look forward to working with Toyota into the future on our journey to becoming a Full Member Test Nation.”