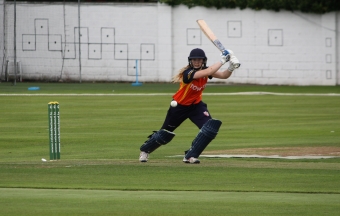 Una Raymond-Hoey strikes a ball through the off-side

The Series comprises three teams – Dragons, Scorchers and Typhoons – who play a multi-format competition that encompasses 50-over and T20 matches.

In 2018 the Dragons took out the Championship for the second time in three years, led by Irish international Shauna Kavanagh. However, in a shake up to the teams in 2019, Kavanagh and her international compatriot Kim Garth have swapped camps, with Kavanagh set to lead the Scorchers and Garth the Dragons.

At the recent announcement of the 2019 squads Kavanagh spoke of her excitement at the new challenge:

“Quantifying the importance of the Super 3’s competition is difficult in that the impact and contribution the competition has already had - and will continue to have - for women’s cricket in Ireland is huge. One of the key contributions is the expansion of the existing player pool capable of progressing to the international stage. There have been some really impressive players coming through to the international set-up over the last two years partially resulting from the opportunities that the Super 3’s competition provides.”

“I think the Super 3’s pathway also provides women and girls across the country with a visible and attainable development structure that can only encourage and promote participation.”

“I am looking forward to the fresh challenge the 2019 competition brings with the new structure of the squads. It gives individuals the opportunity to play against new opposition as well as the opportunity to learn from new individuals within their own squads. I am also excited to see the standard of this year’s competition given the strides it continues to make year on year.” The first match in the series will see the defending champions Dragons take on the Scorchers on 19 May 2019 at North Kildare Cricket Club.

In a welcome initiative to further increase the visibility of the women’s domestic game in Ireland, this season will see the first fixture played north of the border when Typhoons and Dragons will meet at Holywood Cricket Club in July.