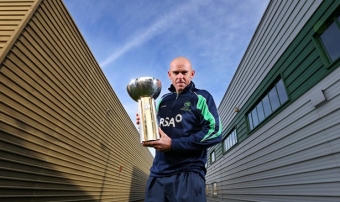 Some of Ireland’s treble winning squad were present at a press conference at the Cricket Ireland offices in Dublin today as they marked an truly amazing 2013.

It has been an historic season in 2013 for Ireland’s cricketers who were champions in three different ICC Global events, in three different formats this year. In September, Ireland were crowned as winners of the ICC World Cricket League Championship, which was the qualifier for the 2015 ICC Cricket World Cup. In November, Ireland triumphed over 15 other nations at the ICC World Twenty 20 Qualifiers beating Afghanistan in the final in Abu Dhabi; whilst finally last week they completed victory over Afghanistan in the ICC Intercontinental Cup to crown an unprecedented treble in world cricket.

National Coach Phil Simmons, who has recently signed a two year extension to his contract., Trent Johnston, the former Irish captain and veteran of 198 appearances for Ireland who has recently been named as the Ireland Women’s Coach and vice-captain Kevin O’Brien, was last week named as the ICC Associate and Affiliate Cricketer of the Year all spoke with the press and reflected upon an amazing year for Irish cricket.