Tucker and McBrine lament loss, but pleased with personal achievements 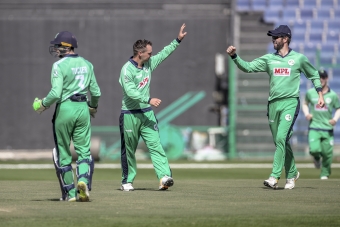 While both players admit that the team win would have been a preferred outcome, their individual achievements were notable achievements and they hope to build on this performance over coming games.

Lorcan Tucker, 24, made his debut in 2016 and had made 31 appearances at senior level. The first-choice wicketkeeper for the last 12 months, Tucker posted his highest score as a batter for Ireland with an assured 83 from 96 balls, striking 3 fours and 3 sixes in the run chase.

This was his second international half-century, and came after an 81-ball innings of 42 in the last ODI against UAE last Monday.

Speaking about his form over the last two matches, he said:

“I think time in the middle really stands to you on wickets like this. I was lucky to get that time against the UAE and that gave me some confidence going into the opening game against Afghanistan. Whilst it was nice to get some runs, they don’t mean that much if we don’t get that win.”

“Obviously, Rashid, Mujeeb and Nabi together form a dangerous attack, but our plans revolved around nullifying that threat by turning over strike and taking minimal risks. We know that as long they’re not taking wickets, we’re going alright.”

Reflecting on the outcome yesterday, he said:

“I think we let ourselves down in the field yesterday. We missed several chances, myself included, that could have had a drastic effect on their total and thus, our chase. As a group, we work hard on our fielding, so we hope that yesterday was a one-off and we can return to our high standards on Sunday.”

Andy McBrine, 27, has 84 international caps since his debut in 2013. In the last match against the UAE he took a creditable 1-19 from 5 overs, but watched his teammate Simi Singh claim a five-wicket haul. This match, though, it was McBrine’s turn and this was his first five-for for Ireland taking 5-29 from 10 overs - with his fifth wicket coming off the very last ball of his spell.

“It was obviously pleasing for myself to get my first five-for for Ireland yesterday, but the result puts it more in a wee bit of a downer – it would have been nicer to get five wicket and a win, but it wasn’t to be. I’ve been practising quite hard for the last 3 or 4 weeks out here and lucky enough yesterday was my day with the ball.”

“The leg slip we deployed was a funny one, Balbo [Andrew Balbirnie] and I didn’t really think the regular slip was in play yesterday. I was finding a bit of purchase in the wicket and I thought a leg slip may have been more in the game and thankfully it worked out for us.”

The squad has had a rest day today, and will be back training tomorrow ahead of Sunday’s second match of the three-match series.