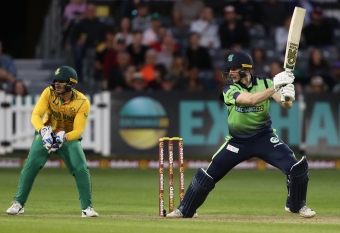 BRISTOL - A blistering 38-ball 78 from Lorcan Tucker wasn’t enough for Ireland as South Africa secured a 21-run win in the first T20I.

Set a steep target of 212, Tucker and George Dockrell (43 off 28) kept Ireland in the hunt until wickets tumbled at the end of the chase.

South Africa won the toss and chose to bat first, putting on 23 in the first three overs before Quinton de Kock departed for 7 from the first ball of the fourth; attempting a quick single, the left-hander was caught short after Harry Tector was quick to move at mid-off and hit the stumps at the non-striker’s end.

Rassie van der Dussen departed for 10 a couple of overs later, his attempted flick resulting in a catch at third man off the bowling of Andrew McBrine.

From there came the biggest partnership of the innings, with Reeza Hendricks and Aiden Markram putting on 112 for the third wicket. Hendricks dominated the early stages of his stand, continuing his excellent recent form to reach his fourth consecutive T20I half-century off just 32 deliveries.

While Markram was patient to begin with – he hit 11 off his first 13 deliveries – the boundaries soon began to flow. His half-century was reached off just 25 deliveries, with the right-hander taking 20 runs off four consecutive Josh Little deliveries at one stage.

Hendricks and Markram’s partnership finally came to a close in the 16th over when the former chipped Gareth Delany to deep midwicket. Hendricks fell from the very next delivery, finding Paul Stirling at point to depart for 74.

South Africa bounced back quickly from those two blows, with Tristan Stubbs (24 off 11) and Dwaine Pretorius (21* off 7) lifting the Proteas to 211.

In response, Wayne Parnell was responsible for the dismissals of Ireland’s two openers, Stirling (18) and Andrew Balbirnie (14).

It took Tucker to truly ignite the innings as he raced to 24 off just eight balls, effectively using his feet to come down the pitch and aerially attack Parnell down the ground.

Tector, Delany and Curtis Campher all departed cheaply but Tucker kept on motoring, and he found the perfect partner in Dockrell to resuscitate the Ireland innings. Together the pair put on fifty in just 25 balls, and when Tucker smashed six and then four off Shamsi in the 17th over, Ireland were well and truly in the game.

But Tucker then failed to properly connect with his shot against the wrist-spinner, gifting a simple catch to de Kock behind the stumps, and Dockrell perished not long after off Pretorius.

From there South Africa took full control, with Mark Adair and McBrine departing before victory was finally secured.