Turkish Airlines to remain on board with Irish cricket 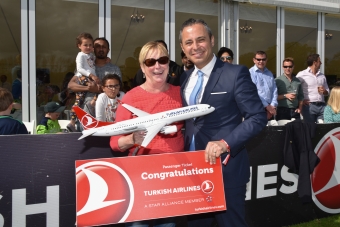 DUBLIN – Due to the downturn and uncertainty in the global aviation sector, Turkish Airlines – International Men’s team sponsor of Cricket Ireland since 2017 - has made a decision to end its existing partnership with Cricket Ireland six months early. However, as a positive sign of the carrier’s commitment to Irish cricket, the airline will stay on as Official Airline Partner.

Cricket Ireland has commenced discussions with Turkish Airlines on extending this airline partnership beyond 2021.

“During these challenging times, we have had to make some hard decisions. The downturn in the industry with the restrictions put in place by local authorities have seen us cut our flights globally like all the other carriers. We believe that we will get over these unprecedented times and see the sunny days again in the very near future.”

“From Day One the partnership of Turkish Airlines and Cricket Ireland has been the perfect match. We have had the privilege of sharing some amazing times. Seeing Ireland play their first men’s Test match against Pakistan in Malahide in 2018, and to be part of the Test at Lord’s in 2019. We are truly sorry to be dropping off as the senior men’s sponsors but on the other hand delighted be continuing our partnership with Cricket Ireland as their Official Airline Partner. I would like to thank the entire Cricket Ireland family for their cooperation and support.” “I think every Irish cricket fan will understand that it has been a tough period for the world’s airlines, but it is both a tribute to Turkish Airlines and an endorsement for the Cricket Ireland brand that we have been able to maintain a relationship through the new partnership agreement.”

“Cricket Ireland and Turkish Airlines have had a very close, collegiate relationship since early 2017, and last year signed an extension to that original partnership. We are truly sorry to see their brand drop off the senior men’s kit, as it has been a very strong and symbiotic association for both organisations.”

“However, we are pleased we could retain a mutually beneficial relationship going forward, and to that end I would like to acknowledge the loyalty and commitment of Hasan Mutlu and his team here in Ireland on negotiating this great outcome despite the challenges faced by their industry.”

An announcement about a new International Men’s team sponsor for Cricket Ireland will be made in coming days.