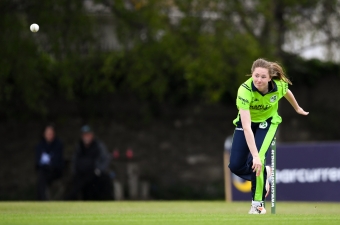 Louise Little in action for Ireland, 2019

DUBLIN – Selectors have been forced to make two changes due to injury to the Ireland Women’s squad travelling to the Netherlands for a three-match one-day international series against Netherlands Women from 22-26 August 2022.

Ava Canning and Jane Maguire have both been forced to withdraw with injuries sustained in the last week, while Louise Little and Kate McEvoy have been called up as replacements.

Little, 19, made her international debut in 2017 and has played six ODIs and 10 T20Is. The hard-hitting top-order batter and fast-medium bowler is the sister of Irish internationals Josh Little and Hannah Little. She last featured for Ireland in the ICC T20 World Cup European Qualifiers in 2021.

McEvoy, 20, was named for the first time in a senior Irish squad in 2022. A swing bowler who often opens for the Dragons in the Arachas Super Series, she is in line for her international debut if selected.

It is anticipated that the matches will be livestreamed, with confirmation of details to be made in due course.