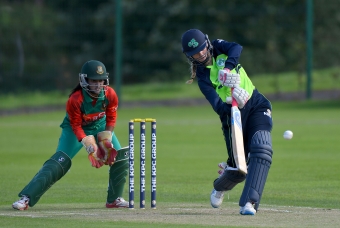 Gaby Lewis in action for Ireland

The ICC Women’s Global Development Squad is a new initiative between the England and Wales Cricket Board and ICC which aims to provide the opportunity for high-performing players outside the ICC Women’s Championship to develop their skills, ensuring women’s cricket continues to go from strength to strength.

The Women’s Global Development Squad, consisting of 13 players, has been selected from teams who are competing in the Women’s World T20 Qualifier 2018 in the Netherlands.

The squad will play a minimum of five T20 matches against Kia Super League teams between 15-21 July 2018. The Squad will consist of players from Bangladesh, Netherlands, Scotland, Papua New Guinea, UAE, Uganda and Ireland.

“Cricket Ireland is delighted to support this new ICC-led initiative that will benefit women’s cricket in Ireland and around the world.”

“Part of our commitment to making cricket a mainstream sport in Ireland is to improve the women’s game, from grassroots to elite levels. The ICC Women’s Global Development Squad is an excellent vehicle to recognise some of our stars of the future and provide a world-class experience that would not ordinarily be available to our team.”

“This is a big year for women’s cricket in Ireland, and we wish Gaby and Lucy well as they head over to England in July.”

Gaby Lewis, who won the 2017 Hanley Energy Women’s International Player of the Year at the last Cricket Ireland Awards, said:

“I’m thrilled to be selected for this squad, and I’m really looking forward to testing myself against the best players in the world. I’m also looking forward to playing with different players I haven’t played with before and hopefully we can gel quickly and compete as a team.”

“Obviously it’s another stepping stone that will hopefully make us better players and as an international team in the future. Apart from a great friendship with Lucy, I’ve great admiration for her as a cricketer and I hope we represent our country well, both on and off the field.”

“I’m really delighted to be selected for the upcoming ICC global development team. Overall, I think it’s a great opportunity not only for myself, but to represent Ireland while playing against some of the top players in the world.”

“It’s fantastic that the ICC is providing an experience like this not only to Full Members but also to representatives from Associate countries. I’m really looking forward to it.”

Ireland was subsequently offered a third spot in the squad off the back of a successful Women’s World T20 Qualifier campaign, with Shauna Kavanagh joining up with her new team-mates.