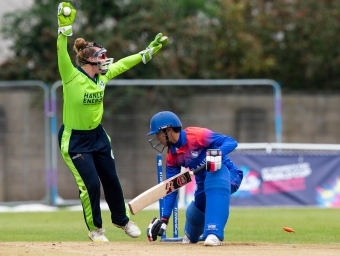 DUNDEE - Ireland Women mounted a late fightback but fell just short of a rain-adjusted target against Thailand, meaning the Thai side finishes top of the Group, with Ireland set to meet Bangladesh in a do-or-die semi-final on Thursday.

Ireland captain Laura Delany won a third straight toss and elected to bowl first. The game suffered a delayed start after morning showers, and while play eventually got underway, just six balls later the players were once more heading for cover. By the time the teams returned to the field the game had been reduced to a 17-over a side affair.

The Irish bowlers struggled early in greasy conditions, with the Thai top-order getting quick runs. Naruemol Chaiwai (24) and Nannapat Koncharoenkai (16) put on 39 for the second wicket and had Thailand at 55-1 in the 10th over, and gradually building the run rate.

Needing a wicket, Delany threw the ball to Eimear Richardson (2-15), who had claimed the first wicket in her first spell. Richardson immediately struck again by removing Koncharoenkai trapped in front, and the wicket precipitated a middle-order collapse. Thailand lost 6-37 in the last 47 balls of the innings, with Leah Paul claiming a personal best return of 3-10 and Kim Garth 1-16. The Thai score of 92-7 looked a challenging but tantalising target for Ireland at the break, but upon resumption the Irish innings early wickets fell and put the batting side on the back foot. Mary Waldron (14) was the only of the top five batters to reach double figures, and when she fell, Ireland was dangling at 37-5 in the 9th over.

Needing a rescue act, Richardson looked to counter-attack and found the boundary on four occasions, but fell on 21 from 19 balls with the score on 69-6.

Paul (11) and Shauna Kavanagh (11) tried to edge Ireland closer to the victory target, but wickets fell too regularly and it came down to the last over with Ireland requiring 8 runs to win. Sophie MacMahon (3*) and Lara Maritz (5) tried to pierce the field but Ireland fell agonisingly short, with Maritz dismissed off the last ball coming down the track and looking to put the ball into the nearby houses but failed to connect and was stumped.

Ireland’s two-run loss means they finish second in the Group. They now face Bangladesh in the semi-final for a do-or-die match to decide which team heads to the Women’s T20 World Cup in Australia in February.