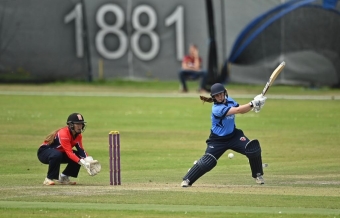 HOLYWOOD – The Typhoons clawed their way back from the brink of defeat to claim a sensational first win in the Arachas Super 50 Cup, thanks to the all-round exploits of Laura Delany and Robyn Searle, as the Dragons collapsed from 205-3 to 216 all out in pursuit of 234.

The Dragons looked likely victors for much of the day, firstly by executing four excellent run outs in a fielding display that was allied by tight bowling to limit the Typhoons to 233 on a good batting pitch, before Sarah Forbes (65), Orla Prendergast (57) and Leah Paul (30) looked to have made light work of the chase.

The Typhoons had other ideas, flipping the game on its head by claiming seven wickets for 11 runs in just 20 balls to claim a memorable win, as the fans in the ground were left stunned. Robyn Searle started the rot, dismissing Sarah Forbes for 65 after a top edge was well caught by a diving Mary Waldron before a flatter off-break pinned Amy Caulfield LBW next ball. The Typhoons didn’t look back from there. Their ruthlessness was typified by Joanna Loughran’s diving catch forward and to her right at point to dismiss Ali Cowan and secure the win.

Laura Delany got in on the act with the ball, claiming 2-14 from six overs and Louise Little’s 2-24 was notable, with the pacer claiming the final two wickets. Prendergast and Forbes, who both batted superbly, will feel unfortunate to have ended up on the losing side.

Earlier the Dragons won the toss and opted to bowl, choosing to give the Typhoons first use of a pitch that neither side has played on this season. Alison Cowan replaced Mollie Devine in the final XI after picking up an injury during the warm-ups, while the Typhoons included Robyn Searle and Jess Mayes for Ava Canning and Lara McBride from the eleven the Typhoons last fielded in the Arachas Super 20 Trophy.

The Typhoons started the match steadily, with Celeste Raack (18) and Robyn Searle (45) putting on 48 for the first wicket in 14.4 overs. Mary Waldron’s 22 off 23 balls added impetus to the Typhoons innings, but it would be Laura Delany that would get the Typhoons to a competitive total.

Delany’s unbeaten 83 off 72 balls included 11 fours, with the Ireland skipper being particularly strong using her feet and hitting the ball down the ground. Although wickets kept falling all around, Delany remained and gave the Typhoons the finish they needed to give the bowlers something to bowl at.

The Dragons would have been delighted by their effort in the field, claiming four run-outs, while Kate McEvoy took two superb catches. The first running 15 yards to collect a skier to dismiss Georgina Dempsey off the bowling of Leah Paul before catching Sophie Strickland to a shot that was drilled above head height to midwicket off the bowling of Cara Murray.

In the end it was the Typhoons who took the spoils. They will play the Scorchers – who have six points while both the Typhoons and Dragons have just two - on Wednesday at Pembroke.