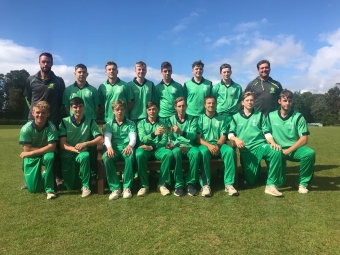 “The coaching group and Irish youth selectors believe that we have selected an exciting group of players who will benefit greatly from an intensive winter programme.”

“The squad’s profile sees no fewer than seven players returning from the 2018 programme and their experience will be crucial in driving team culture and standards as we approach yet another big year for Irish cricket. We see the Under-19 Cricket World Cup qualifiers in 2019 as a key focus for this training group, and indeed for others who may have missed out on winter squad selection. For players and coaches alike, the hard work starts now, and opportunities are there to be earned or learned from.”

“I’d like to take this opportunity on behalf of the Ireland Under-17s coaching group to congratulate those who have been selected and to wish them well with the winter programme ahead.”

In 2018 the Ireland Under-17s squad clinched the Celtic Cup with a series win over Scotland Under-17s in August, and as preparation for that series also completed a successful tour of Worcester where they won two T20s, a 50-over game and drew a competitive two-day game. Aided by performances at this level, a number of this year’s squad - notably leg spinner JJ Garth and wicket keeper/batsman Neil Rock - were recently announced as new members of the Senior Squad at the Shapoorji Pallonji Cricket Ireland Academy, while players such as Oliver Metcalfe, Mitchell Thompson and Gavin Hoey, have been named in the Academy’s Emerging Squad.