Under 17s off to winning start 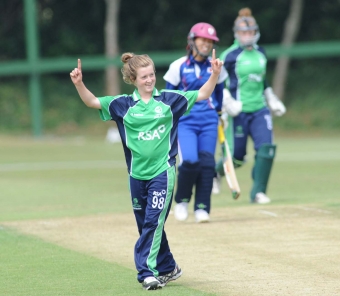 Despite the second match of the day being rained off, the Irish women’s under 17s got off to a winning start today defeating Scotland by seven wickets in the earlier fixture.

The second match of the day was decided to be a 12 over game due to rain, however, it was abandoned before a result could occur. Scotland finished their 12 overs 84 for no loss and in the chase Ireland were 3-1 after 3 overs before rain forced the players off the pitch.

A full match was able to be played for the earlier game where Ireland got the four match series off to a winning start.

Scotland batted first and the Lewis sisters made an impact with the ball with Robyn taking four wickets and Gaby taking three bringing Scotland to 68 all out.

In the chase Leah Paul (19*) and Gaby Lewis (33) opened with a solid 59 run partnership to get Ireland off to a strong start before Gaby was caught out and Ireland required only needed ten more runs to reach to reach the required total of 69 runs in 8.4 overs to get off to a winning start.

The sides will meet again tomorrow in Rush at 11am with the final fixture of the tour being played in North Kildare also at 11am.