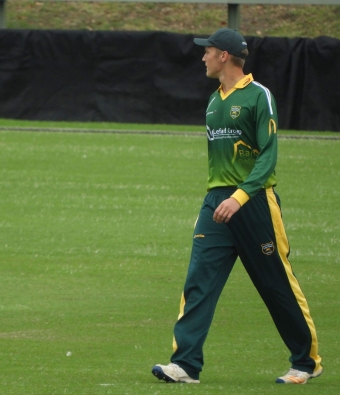 Having toured Bangladesh with the Ireland Wolves squad, YMCA’s Jack Tector is wintering with the Randwick Petersham Cricket Club in Sydney, Australia. How is he settling in to life Down Under? Find out below;

Hello from Australia! I’m about to finish my fourth week here in Sydney and am absolutely loving it. I flew straight in from Bangladesh after our three-week tour with the Wolves—a tough but brilliant tour with a lot being learnt by the group.

I’m living in the leafy suburb of Randwick with John Stewart (Randwick Petersham CEO) which is about ten minutes from our home ground in Coogee and twenty minutes from the city. Baz and Balbo (Barry McCarthy and Andrew Balbirnie) lived in the same place when they were here and both would agree I’m sure, John is a great host and does an awful lot for the Randy Petes. Paddy Flanagan from my home club YMCA is also here studying and taking poles for the Randy Petes.

We train on a Tuesday and Thursday which is the same as back home, a welcome familiarity. Tuesdays are turf nets and on a Thursday we have a centre wicket. Most Wednesday evenings a group of us go down to the SCG indoor school, which is a great setup with first class facilities.

In terms of competitive cricket, I had the huge honour of playing first grade cricket on my first weekend. We declared on 3/250 trying to force a result. (Jack using Australian scoring already!)

I was batting at number 6, so wasn’t required, but it was the perfect way to get to know the various names and faces in the club, including one of Australia’s most promising youngsters Jason Sangha who scored a brilliant ton. Three weeks later he registered another hundred against England for the CA XI in the final tour match.

Last weekend I made my second grade debut away to Blacktown, and while I felt good out in the middle, unfortunately didn’t feature with many on the scorecard. I’ve also played a few T20 matches for the PG’s which is the U21 competition – a very good standard with plenty of talent on display. Most recently we played against Sydney Cricket Club, who have Delray Rawlins from Sussex amongst their ranks. He has done well in county cricket over the last few seasons, and it’s good to have the opportunity to play with and against players of this calibre. We have a 2-dayer starting tomorrow and then a PG’s 50 over game on Sunday, making for what should be an exciting weekend of cricket.

During the week I work for a company called Conversant Media who are part of the H T & E group and located in Surry Hills, not far from from where I live. I’m really enjoying the work and the challenges it brings, as well as it being a great way of keeping myself occupied when not on the cricket pitch.

The begin of the Ashes has brought with it a certain buzz around the place, comparable in a sense to six nations season in Dublin. Myself and Paddy are heading to Melbourne and staying with Oliver Gunning (YM’s overseas 2017) for the 4th test which will be great viewing.

Thanks for reading and I look forward to blogging again!