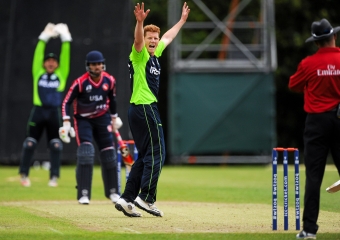 DUBLIN & LOS ALTOS, USA – Ireland Men’s cricket team is set to become the first Full Member nation to tour the United States to play against the USA Men’s national team in Florida this December. The tour will be played over the Christmas period and is the first-ever multi-format white-ball series between the two sides.

In addition, the Ireland Men’s Under-19s World Cup squad will accompany the senior squad for a preparation camp and white-ball series against USA Men’s Under-19s, ahead of the Irish team’s participation in the ICC Under-19 Cricket World Cup in January being held in the West Indies.

The five-match series between the two senior teams will feature two T20 Internationals and three One-Day Internationals, all of which will be played at Central Broward Regional Park Stadium in Florida.

The series precedes Ireland’s scheduled World Cup Super League Series with the West Indies in January in the Caribbean (venues and match dates to be announced shortly).

The dates for the additional training camp and three Men’s U19 matches will be finalized and announced shortly.

As part of the agreement, Cricket Ireland is also pleased to announce their hosting of a reciprocal tour by the USA Men’s team to visit Ireland for a series of international matches in the next three years. Ticketing arrangements for these matches will be announced shortly via www.usacricket.org.

“We are delighted to confirm the tour of the USA as part of our preparations for the crucial ICC Cricket World Cup Super League series against the West Indies. The chance to play five competitive white-ball fixtures – including three matches under lights – will be important as our players return to the field after a few weeks off.”

“With a large population of Irish expats and emigrants in the United States, we hope to see a good turn out of support for our squad and look forward to spending time in one of the USA’s best cricket facilities.”

“The progress of USA Cricket has been commendable over recent years, and we hope that not only will this opportunity allow our players to build towards the World Cup Super League Series, but that our involvement may also be a boost for USA Cricket as they work hard to develop the game across the United States. We’d like to thank all at USA Cricket for putting together this opportunity.”

“As an added bonus, we will be flying our Men’s Under-19s World Cup squad to the US later in December to provide a preparation camp and a series of matches for those players ahead of the tournament. We are delighted with the opportunity to play what is likely to be a tough series of matches against the USA Men’s U19 national team.”

“USA Cricket is absolutely elated to confirm next month’s series’ with Cricket Ireland that we have been working on over the past few months as we continue to try and expand the playing opportunities for our national teams. To be able to bring an ICC Full Member to the United States to play a series of five international matches is an historic and hugely significant step forward for cricket here in America.”

“We hope that this series helps to showcase the potential in American cricket with it being the first ever home series of international matches against a Full Member. We will be announcing ticketing details next week and hope that the timing of the series will give people a great opportunity to come along and see high-class international cricket in the flesh next month in Florida.”

“This announcement also sends a signal to the international cricket community that cricket in the USA is moving in a very positive direction and that we have aspirations to compete against the best teams in the world on an increasingly regular basis on home soil.  It adds great context to the Men’s 50-Over National Championships that will be played later this month, with selection for this exciting Ireland series on the line, and we are thrilled to be able to reward our Under-19s team with some serious international competition after they missed out on the opportunity to qualify for the ICC’s Men’s U19 Cricket World Cup earlier this year.”

“The journey of Irish cricket to Full Membership of the ICC is something that we have studied and we hope to replicate by 2030.  We take inspiration from what Irish cricket has achieved over the past ten years and we are grateful to the leadership of Cricket Ireland for helping to make this tour a reality.”