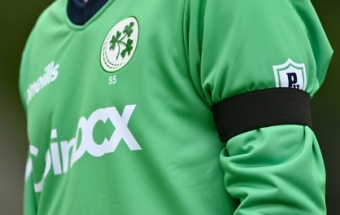 Our condolences to Cecil’s family and friends at this sad time.

Cecil was Cricket Ireland President in 1988, received an MBE for services to cricket and an ICC Centenary Medal recognising his enormous volunteering contributions. He was a stalwart of Lisburn Cricket Club and the Northern Cricket Union, and his legacy within the Irish game is extensive.

Tributes will be added here over coming days.

Few people have made a greater contribution to cricket in Ireland down the years than Cecil Walker who has died at the age of 89. He was the true amateur player and administrator: above all, the true gentleman.

On the field, he captained his beloved Lisburn club to three NCU league titles and was part of six Challenge Cup-winning teams.

With the roles came a visionary, an entrepreneur and a benefactor who enriched club, provincial and national cricket decade after decade.

Cecil Walker’s vision was to the forefront of the appointment of Ireland’s first professional coach, the late Mike Hendrick, in 1995. Some 20 years earlier he was the force behind the first club professional in the NCU when John Solanky joined Lisburn.

His entrepreneurial spirit honed as a successful businessman saw to lucrative sponsorship at all levels: his charitable ways helped form the first region of the Lord’s Taverners charity in Ireland.

It was no surprise that it was to be Cecil Walker, MBE, in the Queen’s Honours List in 2011. And no surprise two years earlier when he was awarded the ICC Centenary Medal for his outstanding contribution to the game.

But the honour which gave Cecil most pleasure was the naming of the pavilion at Wallace Park after him in 2008.  He had literally put his shoulder to the wheel to have it achieve international
cricket in the 1990s. His warm friendships had seen Ian Botham grace the crease with a century to celebrate the club’s 150th anniversary: his chum David “Bumble” Lloyd was at the microphone for the 175th-anniversary dinner.

In recent years of ailing health the club patron remained a frequent visitor to Wallace Park with his beloved daughter Gloria to whom heartfelt sympathy is extended and to all the family.

A Service of Thanksgiving will be held in Lisburn First Presbyterian Church at 1pm on Thursday of this week.

Before it, the man they called “Mr Lisburn Cricket” will have his last wish granted: a drive around the place he loved; the place he always called “The Park.”

So sad to hear of the passing of Cecil Walker. He was a true gentleman and a stalwart supporter of cricket across the island. Sincere sympathy to his family and to all at his beloved @OfficialLCC

Very sad news about the death of Cecil Walker. A giant of @OfficialLCC the NCU and Irish cricket. What's more, he was a wonderful person. https://t.co/mocANYZ0EI

We are devastated to hear of the passing of Cecil Walker, an absolute gentleman and giant of local cricket. When we visited Wallace Park, Cecil was always on hand to welcome us with a handshake and a smile. To his family and many, many friends, we send our sincerest condolences. https://t.co/jONVA8AJAe