April 19th 2020 by Cricket Ireland and Robin Walsh | International, Other 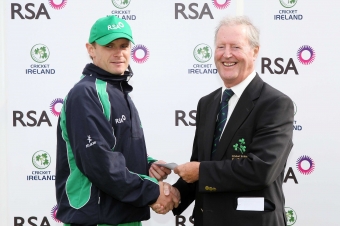 “I am most saddened to learn of Basil McNamee’s death, he was such an admirable servant of the game at local and national level.”

“I had the pleasure of playing on the same Foyle College side with Basil and elder brother Derek back in the ‘50s and, without doubt, it was the best school team in the country - for two obvious reasons. A few years later I was to experience the brothers’ talent in opposition when they distinguished the North side of the ‘60s. No doubt whose side I’d rather be on.”

“I rekindled my friendship with Basil in more recent times when he became president of the NCU and then Irish cricket, he was always a pleasure to enjoy his company and his insights into the game.”

“Alas, the current crisis facing the community will no doubt rob us of sharing our memories at a public tribute. This will obviously add to the pain of members of Basil’s family to whom I extend my sincere sympathy.”