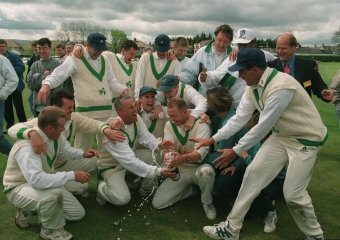 It is with great sadness that we learn about the passing of Mike Hendrick - a man who was a key figure in the rise of Irish cricket in the modern era.

Following are just a number of tributes to Mike from the Irish cricket family.

The image to the left is a famous Irish cricket milestone that was achieved under Mike’s coaching tenure - it was the first win by Ireland Men over a professional team in a competitive match. #RIPHendo

Mike Hendrick, the former English test cricketer, was appointed in January 1995 as the first full-time national coach to Ireland.

His first world cup qualifying tournament was in Kuala Lumpur in March 1997. Ireland beat Gibraltar, Israel and the USA in the final over by two wickets. This set up a meeting with Kenya, who summarily hammered us by 119 runs. Further wins against Singapore and Hong Kong were followed by a ‘no result’ against Bangladesh, before a semi-final against Kenya (which we lost by a heartbreaking 8 runs). This resulted in a third-place play-off against Scotland, which we lost comfortably by 46 runs. That evening Ireland celebrated by throwing Hendo in the swimming pool fully clothed and his glasses had to be retrieved from the bottom of the pool.

Hendrick had his first win against an English county side Middlesex by 46 runs in April 1997, aided by Hansie Cronje. In 1998 Ireland played 26 international matches with mixed results, then in 1999 - after some player discipline issues - Hendrick announced his resignation in August. This was followed ironically by Ireland’s first 3-day win against Scotland at Ormeau in 11 attempts - the game best remembered for a stunning century by Angus Dunlop.

Hendrick introduced coaching structures, as well as the great strides youth cricket was making during his tenure. A more professional approach was adopted by Irish cricket and ‘‘he made the rails for the train to run on’’ was how one Irish selector described his contribution to Irish cricket. He was succeeded by Ken Rutherford as Irish coach.

Cricket Ireland extends its sympathies to his family and friends. May he rest in peace

“While not personally involved at the highest levels of Cricket Ireland during Mike’s time, I met Mike on a number of occasions. His reputation and legacy looms large on the Irish cricket story in the modern era. Mike put us on the right pathway for success and brought a much more professional attitude to everything we did. He had an outstanding playing career across the water, but for Irish cricket he deserves to be remembered as a key figure in our rise on the world stage.”

“I had the pleasure to share an office at the Sports Council with Mike from 1998 until he left in 2000. I found him to be very helpful in my job as Development Manager for Northern Ireland.”

“My first recollection of Hendo was his passion and his knowledge of the game. He was great to bounce ideas off and never short of advice. He would also get involved and assist with initiatives that we ran. He was keen to give youth its chance and really enjoyed working with young pace bowlers such as Mark Patterson and Ryan Eagleson.”

“One of his initiatives that proved very fruitful was an end-of-season tour he organised to play county teams on county grounds. He would just lift the phone, speak to some of his old contacts, arrange dates, grounds and the strength of the opposition that he wanted to play against. He used these tours to blood young prospects who he thought might have what it takes to represent Ireland. He would take a few current international players and a lot of promising young players to observe how they coped with the pressure.”

“A lot of his friends held a farewell dinner at Dunmurry Golf Club for Mike before he left, which turned out to be a superb evening. The evening ended with a great address from the man himself, when he expressed his love of Ireland and his appreciation for the reception that he had received during his period here.”

“We have followed reports of Mike’s failing health this past few years with great sadness.  I know that all his friends in the north will have fond memories of Hendo.”

@cricketireland so saddened to hear of the death of Hendo the man who started the cricket revolution in Ireland. Loved by the players hard but fair - Always remember “what the f is wrong with top of off stump” We all hoped to get over in Sept but nature got in the way. #ripbigman

Very sad news coming out of the UK. The wonderful Mike Hendrick passing away. A brilliant cricketer smashing coach and thoroughly lovely man. We loved him in Ireland both players and supporters alike. #RIPHendo

Sad day. Thank you Mike Hendrick for everything. You paved the way for others to follow. #RIPBigDave

Sad to hear of the passing of Mike Hendrick. He was an integral part of the @cricketireland journey to a place on the world stage. RIP.

Sad news. Hendo was a compelling character and a friend to Irish cricket, as well as being the purveyor of a devastating leg-cutter back in the day. Condolences to his nearest and dearest. https://t.co/JRVlkOiyUJ

Our thoughts are with Mike’s family at this sad time.