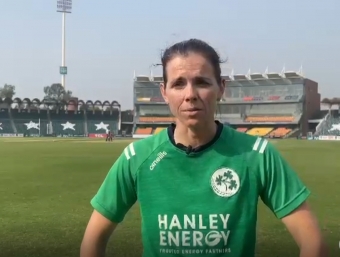 LAHORE, Pakistan – Despite trailing 2-0 in the current three-match One Day International series against Pakistan, spin-bowling all-rounder Eimear Richardson believes the tour so far has been a valuable learning experience for the young squad. She was speaking today at training at the Gaddafi Stadium in Lahore.

The Ireland squad will arrive in Lahore on 29 October and hold training sessions on 31 October to 3 November.

* the ODIs are part of the ICC Women’s Championship

The matches will all be livestreamed on the Pakistan Cricket Board’s Youtube Channel.

Keep up with our podcast

The Green Ball Podcast is all about Irish cricket…and will be a great resource for updates about the T20 World Cup. Make sure you subscribe now in your favourite podcast app.