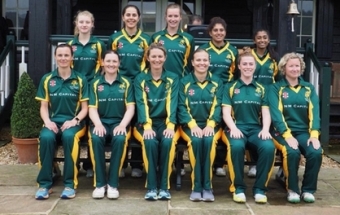 The event was to support the work of FairBreak - a global initiative designed to create pathways for women to have better access to opportunities, education and high-level performance roles.

“I am currently coaching with Lydia Greenway and Cricket for Girls. We held a coaching clinic before the start of the game, which allowed 30 girls to attend and then meet some of the superstars playing in the main event,” she said.

“Watching Mary Waldron batting was definitely a highlight, she went about her innings superbly. The atmosphere at the game, the organisers and teams were a pleasure to be around. With Mary keeping, Charlotte Edwards and myself in slips nothing was getting through…apparently!”

“With the FairBreak team (and sponsors) organising the charity match on the inaugural Day of Gender Equality it was evident that landscape of cricket is shifting, and barriers are coming down allowing equal opportunities, networking and the Cricket Family to expand. It’s something I constantly talk and fight for so it meant a great deal to be there and play my part for women’s cricket, and Cricket Ireland.”