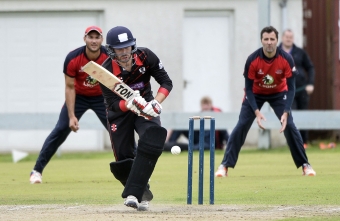 Waringstown will play Pembroke in this year's final

Waringstown have made it to their fifth consecutive Irish Senior Cup Final after a dramatic win against CIYMS in their semi-final. In the other semi-final, Pembroke produced a more routine victory after beating Phoenix by seven wickets out in the Phoenix Park.

Waringstown have developed a brilliant knack of winning matches in this competition, and this being their fifth consecutive final is a testament to the side they’ve brought through. However, they will have not faced a more difficult test to get through to the final then this game. Having been inserted into bat by Waringstown, early going for the CIYMS side was hard, with runs hard to come by due to some very tight bowling. Matchett and Obus Pienaar fell to leave CIYMS 40-2. Chris Dougherty continued to grind out runs, and while joined with Nigel Jones, they both pushed the score along to 97. Dougherty brought up his fifty but fell shortly after, and this was quickly followed by the wickets of Jones and the key wicket of Mark Adair. McCallan struck to get rid of Hunter soon after, but Jason Van Der Merwe played a brilliant innings, scoring a run a ball 48. He combined with late runs from Jacob Mulder (22), James Cameron-Dow (16*) and Trevor Britton 12* combining to get CIYMS up to a respectable 206-8 from their fifty overs. The bowling was tight and was showcased by Haseeb Azam’s 1-7 from his 10 overs. Kyle McCallan also took 3-31.

It was always going to be a nervy run chase for Waringstown in this situation, with so much at stake. Mark Adair struck early to dismiss James Hall for 7. Adam Dennison and James McCollum came together and batted well, but it was tough going and runs were very hard to come by. Dennison was determined but he lost McCollum when he departed to Cameron-Dow for 33. Lee Nelson joined up with Dennison, who was playing the anchor role, but Nelson departed for 20. However, the big wicket fell soon after when Cameron-Dow struck to dismiss Dennison, just after he registered his fifty. Thompson and McClean fell after making starts which brought Azam and McCallan to the crease, still with 60 runs required. This equation narrowed down to needing 8 runs in the last deliveries with McCallan on strike. Waringstown needed a hero, and they got one. McCallan swung Pienaar away for six, before hitting a boundary off the last ball. It sparked scenes of delirium from the Waringstown faithful.

It was a more routine victory for Pembroke as they put in a great display with the ball and in the field against a strong Phoenix batting order. It was largely down to the opening spell of Barry McCarthy. The Irish paceman showed his quality while removing the two prize wickets of Simi Singh and Ben Beecroft, both without scoring to leave Phoenix in early trouble. He then struck twice again in three balls to get rid of Adam Chester and James Maginnis in the ninth over. Nicolaas Pretorius and Poonish Mehta attempted to rebuild on the start that had left at 16-4. However, having made a good 48, Pretorius fell to Jack Balbirnie. Poonish Mehta then was dismissed by Shaheen Khan, who came back late in the innings to finish off the late order. He took the wickets of Mehta, Louis McDonagh, Amish Sidhu and Matt Lunson in a devastating spell of fast bowling. He finished with figures for 4-14, while McCarthy got 4-13 himself in a brilliant performance from the twin fast bowlers. Phoenix dismissed for 136.

Pembroke would have wanted a good start to their chase to make sure in the run chase. It was a solid but circumspect before Jack Balbirnie fell for 7. Fiachra Tucker was joined by Andy Balbirnie and they began to motor the chase for the Sandymount side. Tucker was beginning to get going when he was dismissed for 29, caught behind off Sidhu. However, this just bring Lorcan Tucker into join Balbirnie and these two broke the back of the chase. Balbirnie played a lovely 54 from 46 balls before he fell to Matt Lunson. Theo Lawson came in to join Tucker and these two brought Pembroke over the line, with Tucker finishing 41* including a six to win the game. Pembroke getting to their first Irish Senior Cup final courtesy of a seven wicket win.

So Waringstown will play Pembroke in the Clear Currency Irish Senior Cup Final on the 31st August.