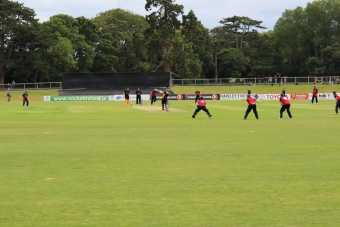 Waringstown will meet The Hills in the final of the Irish Senior Cup after both recorded convincing wins in the semi-finals over Pembroke and Instonians.

Lee Nelson’s brilliant 84 was the catalyst for Waringstown’s successful pursuit of Pembroke’s 187. The Ireland A international struck 13 fours and 2 sixes in his 72-ball innings, in which he showed positive intent from the outset allowing the NCU side to coast to victory.

He shared a fourth wicket stand of 72 with overseas player Shaheen Khan (31*) as Waringstown won with six wickets and 17.3 overs to spare.

Earlier Pembroke had rallied well to recover from the early losses of Fiachra Tucker and professional Nick Cutler, both dismissed by James Mitchell (2-23).

Irish internationals Andrew Balbirnie (29) and Lorcan Tucker (38) added 68, but the run-out of Balbirnie proved crucial, and seemed to upset Tucker who followed immediately after.

Ryan Hopkins (39) and Theo Lawson (35) batted sensibly in a 6th wicket stand of 58, but with Kyle McCallan (2-28) and Greg Thompson (2-47) taking two wickets apiece, Pembroke weren’t able to accelerate in the final overs.

The win means Waringstown have now reached their third successive final, and they will be attempting to equal North County’s record of five wins in the competition.

They will meet two-times winners The Hills who produced an incredible fight-back against Instonians after looking dead and buried in the opening exchanges.

Nathan Smith’s opening salvo saw him claim four wickets to leave the home side reeling at 18 for 4.

However, The Hills have quality and depth, and they showed that here. Max Sorensen led the initial counter-assault as he struck 10 boundaries in a 43-ball 51.

During that period Instonians were dealt a pivotal blow as Andrew White was forced from the game with a serious finger injury which left him unable to play any further part in the proceedings.

Still, Shane Getkate struck twice and at 98 for 6 the balance of power was once again with the Belfast side.

Albert van der Merwe and Ryan Cartwright then took the game away completely with an unbroken 7th wicket stand of 146.

Leinster Lightning coach Van Der Merwe top scored with 82 from 129 balls (8 fours) while Cartwright’s 78 came from 90 balls - striking 5 fours and ending the innings with two maximums as The Hills posted 244 for 6.

Van Der Merwe then claimed three wickets, as did the wily Luke Clinton as the Instonians reply spluttered and failed to ignite.

Clinton’s haul included the prize wicket of James Shannon for 31, as well as former Irish wicket-keeper Rory McCann who flew in from Scotland to help out Instonians who had a keeper crisis.

Instonians finished on 125, leaving The Hills victors by an ultimately emphatic 129 runs.

The final is scheduled for Bready on Saturday September 2nd, and the following day the Magheramason venue will also host the National Cup final, which will feature Malahide and Terenure.

2013 winners Malahide beat Derriaghy in a very one-sided affair after the NCU side were skittled for just 78 - James Newland taking four wickets and Danny O’Shea three. O’Shea (38*) and skipper Alan Reynolds (35*) then knocked off the modest target in just seven overs.

Terenure were always in control of their run chase against Strabane. Chasing 181, South African overseas player Givon Christian hit 82 as they won by six wickets - Jeremy Bray ensuring no late wobbles with an undefeated 24.

At The Lawn, Waringstown beat Pembroke by 6 wickets

At Milverton, The Hills beat Instonians by 129 runs

At The Village, Malahide beat Derriaghy by 10 wickets