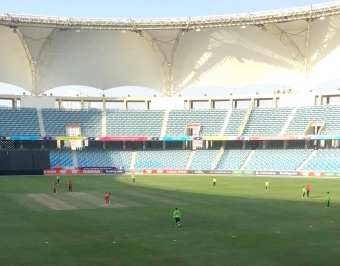 After losing the toss and being sent in to bat first, Ireland lost star opener Paul Stirling early for 5. Three further wickets fell in the next six overs and Ireland were precariously sitting at 55-4 in the 8th over, in desperate need of a counter-attacking innings. Up stepped captain Gary Wilson who struck 44 from 32 balls, including 5 fours and a six. He was ably supported by Harry Tector (21 from 20 balls) and Mark Adair (24 from 13 balls, including 2 sixes).

The Irish batters battled hard to build a competitive total against a determined Dutch attack, and ended up posting 156-8 from their 20 overs.

In response, the Dutch openers led by Tobias Visee started well, hitting 37 from the first 29 balls, but the wicket of Max O’Dowd (6) – a stumping by keeper Wilson from Gareth Delany, started a top-order collapse. Three wickets fell for six runs over the next 15 balls, and the Netherlands found themselves at 43-4 and a required run-rate heading towards 10 runs an over. The damage was mainly done by paceman Craig Young who claimed two wickets in the space of three balls. Young went on to finish with commendable figures of 3-21 from his 4 overs.

As the required run rate grew, further wickets tumbled – Mark Adair putting the icing on the Irish cake by claiming three wickets in the last five balls of the innings to finish with 3-28, and the Netherlands were bowled out for 126.

February 2020 will mark a decade since Ireland’s George Dockrell first stepped onto a cricket pitch in an Irish shirt. His enthusiasm and interest in the game and its development have not waned, and if anything, he has become far more attuned to ensuring he grows and develops his own game to meet the evolving nature and demands of the sport.

Speaking after today’s ICC T20 World Cup Qualifier warm-up match against the Netherlands in which he scored 9*, claimed 1-7 and took two catches (and a spectacular outfield diving catch), Dockrell believes you can never stand still in international cricket.

“I’ve definitely come a long way since my debut. Cricket is always evolving, and the cricket we play now is different to what and how we played nine years ago. You’ve just got to keep moving with that.”

“My game’s definitely more rounded from back then - I’d like to think I’m a lot better fielder and a lot better batter than I was. And with the bowling as well, with the huge amount of cricket that I’ve played, I’ve learnt a lot. I’m probably bowling a little quicker, and definitely have developed a few bowling tactics that quite frankly I wasn’t aware of when I was 17. To be honest, there’s still much to learn and you pick up stuff every game. Cricket, as does sport in general, always keeps moving the developing and you need to keep up with that. It will be a never-ending process for me.” Dockrell, 27, made his international debut at the age of 17. The left-arm off spinner began his junior cricket career as more of a batter and wannabe pace bowler, but converted to off-spin in his mid-teens. While he has often joked that he doesn’t believe he would have lasted so long in international cricket if he wasn’t left-handed, the statistics speak otherwise and demonstrate he is there on merit. More than 280 international wickets at an average of 26.35 across all formats speaks of a highly effective spinner. Of the most wickets in a season rankings for Ireland, Dockrell’s name appears four times in the top 15 performances for Ireland.

He has also contributed handy lower-order runs with the bat, registering more than 1,200 runs at an average of 16.28 with three half-centuries.

Asked about his role in the side, he said:

“As a spinner, it is often your role to try and squeeze the batters in the middle overs. Often. if teams get away at the top during the powerplay, then those middle overs are an opportunity to pull things back. With most spinners that tends to be the role you play, but you have to be flexible as it depends on the conditions on the day.”

“It’s nice to have the complement of spinners that we have on this trip – Gareth Delany, Simi Singh and myself. Gareth has come in and done well over the last month or two, which has been great. Everyone has had a little game time in the last week [in Oman and today], which is important heading into the Qualifier proper. There’s going to be a lot of cricket out here over the next month, and you’d expect the pitches will become a little more worn as the tournament goes on. Spin tends to play a bigger role in those conditions, so it’s great we got some time in similar conditions this last week. The spin group works very well together and we’re looking forward to playing our part.”

Dockrell feels the side has had some great preparation in the lead up the Qualifier:

“We’ve had some good prep - especially the tough Tri-Series in Malahide where we got some good cricket under our belts. Then to come out to Muscat and perform the way we did on good pitches with some good tight contests, which is exactly what you want going into a tournament like this. So while we’re had some good prep and had some good game time, what will be important now is the mental side of things and how we apply ourselves from here on in - that’s probably going to be the biggest factor.”

“The Nepal game last week was a great experience – we posted a total a little below par, but it was great to come out and defend that, to show some fight with the ball and deliver under pressure. Some of our death bowling was great in closing out that game - it is exactly what you want going into the Qualifier.”

He also feels that T20 cricket has on the whole provided some great opportunities for international cricketers:

“I think the way T20 cricket has developed, especially with the T20 leagues around the world, players are playing more regularly against - and at times, with – a variety of opposition players from around the world. Most guys are pretty approachable to talk with about how they go about their cricket, so it’s been great being able to create opportunities for shared learning, which in turn creates a good atmosphere these days within international cricket. However, playing so much with and against other guys means you may know so much more about them, but they also know so much more about you as well.”