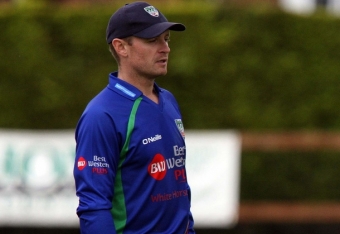 BELFAST - The North West Warriors have taken the points in a close-run, rain-affected encounter against the Northern Knights today, registering their first points in the 2019 Test Triangle Inter-Provincial Cup.

Heading into today’s match, the depleted North West Warriors looked the underdogs on paper, missing captain Andy McBrine, Boyd Rankin and Stuart Thompson, however they were welcoming William Porterfield back into their ranks after missing the last match through injury.

Alternately, the Knights appeared to be favourites - overflowing with international talent and having convincingly won the last encounter between these two sides in April.

After a delayed start due to a morning shower, the Warriors stand-in captain William Porterfield won the toss and chose to bat first under continually threatening grey skies.

The Knights’ Harry Tector (3-34) managed to claim two early wickets, and the Warriors found themselves on 21-2 after just under nine overs. But a gritty and determined batting display by Porterfield (50 runs from 97 balls) and Aaron Gillespie (54 runs from 97 balls) saw the pair put on 100 runs for the third wicket before Shane Getkate struck twice in two overs removing both batsmen and reducing the steadying Warriors to 129-4 in the 39th over. Getkate, keen to remind the international selectors of his talent, claimed two further wickets and finished with 4-28.

Regular wickets fell in the last 10 overs, and the Warriors were finally dismissed off the last ball of their innings for 188 - losing their last eight wickets for just 67 runs.

Captains are being given the dls sheets by the match referee. If we do get back underway for a 20 over bash. It’s going to be 85 off 69 balls. You.’dtake that all day wouldn’t you? #ttip50 pic.twitter.com/QwPG8Qrynh

The response from the Northern Knights was only underway a short time before rain fell, and play was suspended with the Knights on 26-2. Crucially for the Warriors, the visiting side from the North West had removed those two top-order wickets before the rain delay, so when eventually play resumed after a two-hour wait, the Knights were set 85 more to win from 69 balls under DLS calculations.

While seemingly an achievable run-chase with the depth and talent in the Knights’ ranks, the young Warriors outfit bowled a tight line and built up pressure on the batting side. Once Harry Tector fell for 25, with the score at 81-3, the Knights had just 30 to win from 28 balls with 7 wickets in hand. What should have been a reasonably comfortable win turned into a nightmare for the Knights, as five wickets fell in the next four overs, including the crucial wicket of Wilson (40). The Knights eventually ran out of balls and despite a boundary from the last ball of the innings, the home side finished four runs shy of the victory target.

For the Warriors, Gillespie followed up his half-century with the bat by claiming two key wickets of Wilson and the ever-dangerous Neil Rock, while 19-year old left-arm seamer Graham Kennedy claimed a miserly 2-17 from four overs.

Full scorecard can be found here.