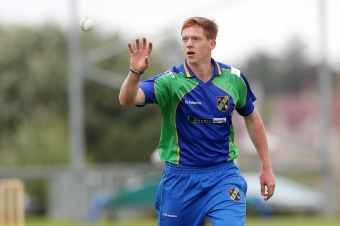 The World Cup start missed out on a friendly against Ireland under 19’s at the weekend, but returns to the fold to captain the side in the first 50-over match of 2015 in the Hanley Energy Inter-Provincial series.

The Warriors will be taking on the Northern Knights at Stormont on Bank Holiday Monday (May 4th), with the action due to get underway at 10.45am, and admission free for all supporters.  The Knights will also be hosting Leinster Lightning on Friday (May 1st) evening in a T20 clash.

McBrine is one of five players who were part of the recent Ireland ‘A’ trip to play the MCC at Lord’s, with Stuart Thompson, Craig Young, David Rankin and Graeme McCarter also included.

Twins William and Gary McClintock, who have been representing Ireland under 19’s in early season friendlies are also part of the 13 man squad named by the Warriors’ selectors today.