May 6th 2021 by Craig Easdown | International 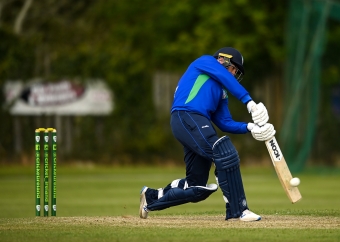 Stuart Thompson hits out on the way to 42

EGLINTON – The North West Warriors bounced back from last Saturday’s loss with an impressive all-round team performance that saw them account for the Munster Reds in the Inter-Provincial Cup today at Eglinton Cricket Club.

After off-season changes to the Cup competition, this match represented the first appearance of the Munster Reds side in the 50-over format.

After morning showers delayed the start of play – and with the game reduced to 43-overs a side – Warriors captain Andy McBrine won the toss and immediately chose to bowl first. After removing Reds’ opener Seamus Lynch (8) early, the Warriors’ tails were up looking to exploit the damp conditions. However, Cormac McLoughlin-Gavin and Murray Commins steadied the innings and then began to counter-attack in a 62-run stand. McLoughlin-Gavin particularly grew in confidence as his innings progressed - at one stage slog sweeping two sixes over mid-wicket, before he was removed by Stuart Thompson for 36.

Curtis Campher then came to the wicket and set about hitting five fours in an innings of 34 from 30 balls. At the other end, Commins joined in with the boundaries, clearing the ropes from a Craig Young half-volley and soon after brought up his fifty with a cover drive to the boundary. Looking to up the run rate, Commins fell on 61 to a tame caught and bowled by Boyd Rankin.

Captain Tyrone Kane (23) and Greg Ford (24) added late runs, but the Warriors wrested back the game’s momentum by taking 6-20 in the last six overs to end the Reds innings on 219 from 42 overs.

For the Warriors, left-arm off spinner Ross Allen claimed three wickets (3-40), while McBrine and Graham Hume took two apiece. Hume was probably the pick of the bowlers finishing with 2-18 from 8 overs and demonstrating his prowess at delivering a patient line and length, while extracting occasional movement out of a green-tinged wicket.

The Warriors response was a model in pacing a run chase perfectly. Stephen Doheny briefly lit up the ground with 20 from 12 balls, while opening partner William Porterfield compiled a solid 38 from 56 balls. For the second match in a row, McBrine came it at first-drop and once more played a confident knock, making 32 from 53 balls.

Stuart Thompson looked to swing the arms and struck four fours and two sixes in an attractive run-a-ball innings of 42. While his dismissal saw the Warriors poised on 148-4, and the Reds seeming to lift in the field, Shane Getkate (35*) and Graham Kennedy (36) came together to put on a 58-run fifth-wicket partnership in 52 balls and take the game away from the visitors. Kennedy fell in the shadow of victory, but Hume and Getkate put the finishing touches to the chase, with Getkate smashing a ball through covers to the boundary to register the well-deserved win.

Andy McBrine was named Player of the Match for his all-round performance making 32 runs and taking 2-36.

The next Inter-Provincial Cup match is between the Northern Knights and Leinster Lightning on 16 May at Comber.