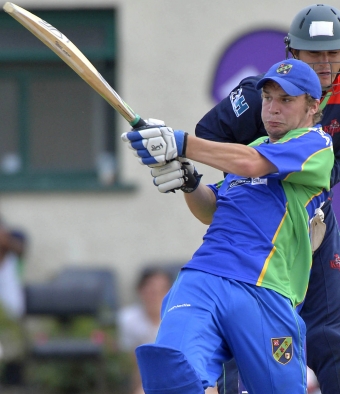 With little at stake after Leinster Lightning had already claimed the trophy spoils, the visitors handed debuts to Craig Lewis, Curtis Moorhead, Michael Gilmour and Mark Berry while Adam Dennison made a welcome return to the starting XI.

The home side welcomed back Craig Young and Stuart Thompson after their respective absences while Bready skipper Davy Scanlon kept his place after an excellent start to his Interprovincial career.

And it was another fairly fresh face that instigated the Warriors’ convincing win on the night as Ryan Hunter made a very impressive 79 as the hosts racked up 192 for 4 from their 20 overs.

The Brigade man hit 8 fours and 4 sixes in a 59-ball knock that was the stamp of a player at the very top of his game at the minute.

Thompson had earlier got the Warriors up and running with 39 made off 32 balls (4 fours and a six), while Danza Hyatt (27 off 13) and Andy McBrine (22 not out from 12) completed the imposing total.

Nikolai Smith (2-25) was the most successful of the eight bowlers used by the Knights in a fairly low-key performance, and their reply never really caught fire either once Jonny Robinson (2-15), Scanlon (2-22) and Thompson (2-24) had got among the top order.

An impressive win for the Warriors then ahead of two more games between the pair over the coming week in both the one-day and three-day formats, starting at Waringstown on Sunday in a 50 over contest.

At Strabane Park, The North West Warriors beat the Northern Knights by 52 runs