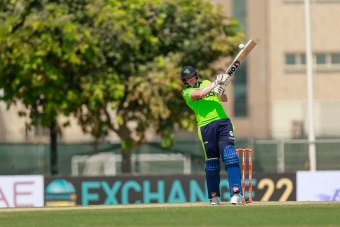 Kevin O'Brien on the way to his half-century

DUBAI, UAE - United Arab Emirates claimed a series-sealing seven-wicket win off the back of an unbeaten century from Muhammad Waseem and a resilient bowling performance, despite a strong Irish start.

The game was not so much one of two halves as it was one of four quarters. Ireland claimed the first, with Paul Stirling and Kevin O’Brien putting on a trademark opening stand.

Stirling was the early aggressor, hitting four boundaries in the first five overs. He got things moving with two fours in two balls in the second over, driving through the off-side and then clubbing over mid-on, and if there was a hint of fortune about the third, edged past the keeper, then the fourth was all class, beautifully guided behind square on the off-side and teasing the fielder all the way to the fence. The flurry took him into first place for most fours among all players in men’s T20I cricket, another proud record for a player with several already in his locker.

With O’Brien content to tuck singles, Stirling dominated the early strike too. After five overs, he had 26 off 18 to O’Brien’s 11 off 12.

A quiet stretch followed as the pair took stock, and while the singles continued to trickle along, soon O’Brien had had enough, taking on the attacking mantle from Stirling to glorious effect. In the eight over he stepped out to smash a big six over long-off off Palaniapan Meiyappan, before backing away to manufacture a lofted shot square on the off-side and then struck straight as a die, high and handsome down the ground for another six in the leggie’s next over.

What a shot that is first ball! Curtis Campher reverse sweeps for four fine on the off-side, notching our first boundary since the 10th over

At the halfway stage, Ireland were 76-0 and seemingly set for a big total, but a stellar spell from Rohan Mustafa dragged UAE virtually single-handedly back into the contest.

The off-spinner, brought on to bowl the 13th over, struck with his third ball, palming a firmly hit Stirling drive up in the air to complete the catch himself. The stand ended at 85, the 12th partnership above 50 in T20Is between O’Brien and Stirling. In men’s cricket, New Zealand’s Kane Williamson and Martin Guptill and Scotland’s George Munsey and Kyle Coetzer are the only pairs with as many, and no duo has more.

Mustafa struck again in his next over, a yorker proving too good for Gareth Delany, promoted to No.3, and while O’Brien brought up his half-century in the next over, he was the next to fall, backing away in an attempt to create room through to off-side only for Mustafa to beat his attempted loft.

Curtis Campher began inventively, playing a reverse lap sweep for four off his first ball, but it was only a brief respite, with that shot bringing about Ireland’s sole boundary in the last 10 overs of their innings.

Campher soon holed out to deep midwicket off Kashif Daud, before another excellent yorker, this time from Zahoor Khan, removed George Dockrell. It was left to Mustafa to deliver perhaps the most damaging blow of the innings however, with the first ball of the final over a literal toe-crusher, forcing Andrew Balbirnie, who had scrapped hard for his 19-ball 15, to retire hurt. Stirling took on captaincy duties in the field, with Harry Tector acting as sub fielder. Some hard running in the final over dragged Ireland up to 134-5, but UAE had the momentum.

Ireland began their defence gamely, but it soon became the Muhammad Waseem show. Singh struck in the second over, enticing Chirag Suri to hit high rather than long down to long-off, before Waseem and Vriitya Aravind signalled their intent with a pair of contrasting sixes, Waseem stroking gloriously over extra cover, and Vriitya scooping audaciously over fine leg.

Craig Young used all his experience to respond to that second blow, with a swirling leading edge off the next delivery held by Kevin O’Brien running in from long-on, and with the score reading 39-2 at the end of the powerplay, the result was in the balance.

From there, however, Waseem ticked through the gears. He found the fence once in each of the first three overs following the powerplay and cleared the ropes in the fourth, taking UAE to 71-2, more than halfway to their target at the end of the 10th over. Two more boundaries came in each of the 11th and 12th overs, and almost as soon as his century became a possibility, it seemed inevitable, with three fours and a six off consecutive legal Campher deliveries taking Waseem from 68 to 86 in a flash.

While there were some moments of luck, with Ben White beating the edge in his first over and an aborted pull off Young and inside edge off Campher just evading fine leg and the stumps respectively, but there were also several strokes of class and authority, including one six over backward square that flew into the commentary box.

Mohammad Usman was perfectly content to block up an end and watch the carnage unfold, departing only after Waseem had brought up his century, having contributed 10 off 19 to their 92-run stand. Three balls later, and another straight six from Waseem gave UAE victory by seven wickets, with 23 balls remaining, the opener having contributed 77 percent of his side’s runs.

INJURY UPDATE - Andrew Balbirnie was taken off retired hurt after an impact toe injury, following which he was unable to bear weight. He will have an X-ray tonight to assess the injury.