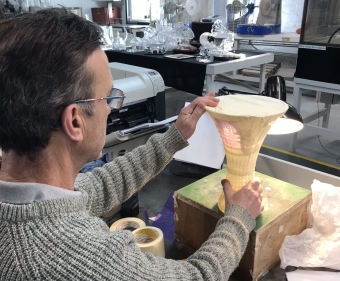 DUBLIN – With the 2020 Turkish Airlines Irish Cricket Awards set to be held on Friday evening, a new event partner with a global link to cricket has been unveiled that will be sure to add sparkle to proceedings. Irish crystal maker, Waterford, has crafted the awards for the event’s category winners, heralding a new association between Waterford and Cricket Ireland.

“Waterford has a proud history of creating iconic crystalware since 1783, and we are pleased to become involved with Irish cricket’s night of nights. The Irish Cricket Awards recognise the best of Irish talent on the world stage, and as Ireland’s leading crystal manufacturer, we are delighted to be associated with cricket here in Ireland.”

“We congratulate all winners on the night and look forward to enjoying a night of celebrating Ireland’s role in the world’s second-biggest sport.”

“The last few years have seen a steep growth in awareness and involvement in Irish cricket – not just on the field, but also with our family of sponsors and business partners. Support from our partners drives investment at all levels of our sport and has been one of the reasons we continue to punch above our weight on the world stage.”

“We welcome Waterford’s support for Irish cricket, and hope this may be the start of a long-term association. A partnership with such an iconic Irish brand puts the best of Ireland in the global spotlight, and the winners of these stunning crystal awards are sure to be the envy of the Irish cricket family.”

The 2020 Turkish Airlines Irish Cricket Awards will be held in Dublin on Friday 28 February 2020.

Award category: Sunday Independent/Aengus Fanning Outstanding Contribution to Coaching
• To be announced on the night

Award category: Gibney’s Outstanding Contribution to Irish Cricket
• To be announced on the night

Award category: Toyota Super 3s Player of the Year
• To be announced on the night

Award category: Cricket Writers of Ireland Hall of Fame
• To be announced on the night

The Ashes is the most iconic Test cricket series in the world played between England and Australia. The original Ashes ‘urn’ had become the symbol of the series, however, no transferrable ‘trophy’ was ever presented to the winning captain which could be retained by the winning country, as the historic urn was retained at Lord’s Museum.

By the 1990s there was considerable public demand for a trophy that could be given to the winning team to mark a series victory. This demand led to the creation of ‘alternative’ urns at various stages. In 1998 the MCC Waterford Crystal Ashes Trophy was created and was first presented to Australian captain Mark Taylor at the end of the 1998/1999 series. The MCC wished to retain a link with the original urn, so the crystal trophy was created in the image of the original urn.