We have a full squad to choose from says Porterfield 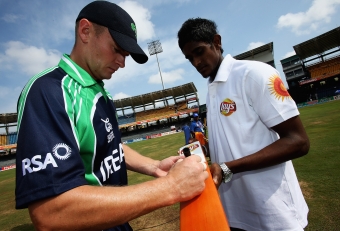 Ireland captain plays down health issues in team, says he has a full squad to choose from for the crucial showdown between Ireland and the West Indies.

Ireland were thrown a lifeline on Saturday when a combination of Australian aggression and the rain overcame a strong West Indian challenge at the R Premadasa Stadium. It is now simply a winner takes all scenario this evening in Colombo.

Ireland, who had lost to Australia by seven wickets in its opening Group B encounter on Wednesday, must beat the West Indies to advance to the Super Eights of the ICC World Twenty20 2012. Anything less than victory will eliminate the Irish, whose net run rate of -2.092 is inferior to the West Indies’ -1.854.

Hard at practice for the last four days, Ireland’s preparations received a jolt when three of its key players, Paul Stirling, GeorgeDockrell and Alex Cusack, went down with stomach bugs and missed Sunday morning’s training session at the P Sara Oval. “A few lads have gone down with their stomachs and the like but obviously it is just a bit of a precaution,” said William Porterfield, the skipper. “I haven’t spoken to any of the lads who have gone down but hopefully it is more of a precaution than anything else. We have done our preparations, it’s just a matter of brushing up before the day of the game and do what we need to do but as long as everyone wakes up well tomorrow morning, we will have a full squad to pick from.”

Ireland will have to contend with a formidable West Indian batting line-up full of Twenty20 specialists, prominent among them Chris Gayle, Dwayne Bravo and Kieron Pollard. “It’s obviously going to be pretty difficult to stop them,” conceded Porterfield. “They are specialists in this form of the game. They travel the world and play in all different competitions throughout the world in this format. So it’s not going to be easy but as I said, it doesn’t matter who is at the other end as long as you control what you want to do with the ball and put it in the right areas.

“If someone plays a good shot, they play a good shot but you must be consistent over 20 overs. They can obviously be destructive and they have got that capability. We will be looking to put pressure on them and those first six overs, both with bat and ball, are going to be a crucial part of the game. If we can restrict them in those first six and pick up a few wickets and get a bit of a start ourselves, that will be key for the game.”

Australia’s win over the West Indies, Porterfield said, had been vital for Irish prospects, but there still was work to be done. “That’s what we needed after our game against Australia and obviously Australia won the game last night, so it is a straight shootout but that’s only part of the job,” cautioned Porterfield. “We still have got to turn up tomorrow night and do the job from our point of view, which we are more than capable of doing. That’s the position we wanted to be in.”