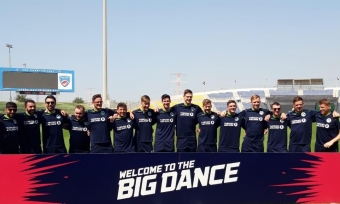 ABU DHABI, UAE - Following the United Arab Emirates v Canada game on Sunday evening, it was confirmed that Ireland has automatically qualified for the ICC Men’s T20 World Cup in Australia, to be held from 18 October to 15 November 2020.

Group B had involved a hard-fought series of matches, with all sides knowing that only the top side at the end of the Group Stage would automatically qualify for the World Cup.

Ireland convincingly won its final two matches against Jersey and Nigeria to take them top of Group B, however, required two results elsewhere to go their way the next day - Jersey needed to beat the much-fancied Oman, and then the UAE nor Canada result could finish with a resounding victory for either side at the risk of both sides still being able to, albeit miraculously, pass Ireland on Net Run Rate.

Fortunately for Ireland, the Jersey side pulled off a remarkable victory over Oman, and then the following match saw a win to UAE but not sufficient to scale that the Emirates side could catch the Irish Net Run Rate.

Ireland were through, topping Group B!

Ireland has officially qualified for the Men’s @T20WorldCup!!