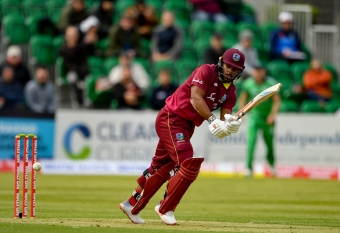 DUBLIN – West Indian opening pair of John Campbell and Shai Hope dominated the day in a big win over Ireland in the first match of the Walton One-Day Series at Clontarf today.

After losing the toss and being sent into bat, Campbell (179 from 137 balls) and Shai Hope (170 from 152 balls) put on a 365-run opening stand – the highest first-wicket stand in one-day international cricket history.

While Ireland’s bowlers were on the back foot, the returning Barry McCarthy claimed two wickets (2-76), and Mark Adair claimed his first international wicket for Ireland.

Ireland’s response got off to a positive start with captain William Porterfield hit three boundaries in the first six balls, but the loss of early wickets meant Ireland was always going to be fighting to keep in the fight.

Andy Balbirnie, batting positively with several flourishing shots, was struck in the helmet and had to retire hurt. He returned later, eventually dismissed for 29 – during the innings he scored his 1,500th ODI run for Ireland in this his 100th match for the men in green.

But the best innings of the Ireland batting response went to Kevin O’Brien who hit 68 from 77 balls (seven fours, one six). O’Brien looked in total charge of the bowlers – even the fastest seamers in the Windies attack:

After O’Brien fell, wickets tumbled at regular intervals and Ireland were dismissed for 185, handing West Indies a 196-run victory.

After the match, Kevin O’Brien gave his assessment:

“It wasn’t best day in the office. The difference between Friday’s match [against England] and today was that on Friday everything stuck which is great for us on the day, but today everything went just out of reach – they didn’t really give any chances. You’ve got to give them credit, they played very well, it was just unfortunate we didn’t turn up in the field and let them get in and get away.”

“We were well placed at one stage to chase a total of 330, but perhaps the start we had losing early wickets made it difficult of course to chase 380.”

When asked what the last two games have taught the Irish side, O’Brien said:

“I think we’ve learnt how clinical we have to be, to deal with the bad ball and in the field - we can’t drop any catches and have to take the run out chances when they come. Our bowling has to be spot on as we don’t have the raw pace that other teams have, so we’ve got to be very accurate. It’s good that the young guys are experiencing this cricket, the likes of Mark Adair and Lorcan and Josh as well, even the likes of Barry McCarthy who has been in and out of the side as well, it was good for him to get in and get a few wickets – he got his 50th ODI wicket which was good for him.”

The next match in the Tri-Series is on Tuesday at the same venue between West Indies and Bangladesh.