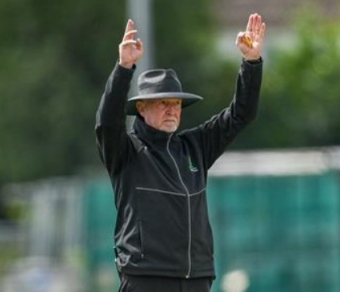 Umpires are an essential part of our game and over the next couple of months IACUS (Irish Association of Cricket Umpires and Scorers) will be running cricket umpire courses that aim to attract and grow the pool of new umpiring talent in Ireland - both men and women. And the training is being led by one of Ireland’s best, Alan Neill.

Alan Neill, who stepped down as an international umpire in 2021, is not lost to Irish cricket’s umpiring ranks due to calling time on his international duties - far from it. As a leading member of IACUS, Alan is keen to see a new generation of Irish umpires emerge to support the burgeoning number of cricket matches played across the island, from grassroots to international.

Alan's first ODI was 2016, but he’s been umpiring in Ireland at senior club and provincial level since 2004.#ThanksAlan pic.twitter.com/l2DuxRAxMJ

When IACUS recently sought to standardise umpire education and training, Alan - as a retired Physical Education teacher of over 30 years experience - put up his hand to help drive the work.

His goal over the next three-to-four years is to try and get the correct courses taught in the various regions by qualified tutors that have been accredited. As such, all umpires will receive the same training from a good standard of tutor (of which Alan has trained five out of the six tutors involved). The umpires themselves will then be accredited at the completion of the course.

“Some of the materials from previous courses were outdated, so we’ve rewritten them. We’ve restructured Stage One and Stage Two using local umpires and incorporated new laws for this incoming season.

“There are often big numbers attending Stage One courses – In Leinster they had 33 or 35 for one course - but that doesn’t always result in big numbers on the field. Despite the percentage of successful candidates, they’re qualified in theory to go and stand, but not many of them do.”

Alan explains why that’s the case:

“Some of them just like the game and like to learn more about the game, while some others are still playing. Most of them are quite young. The problem is the experience they’ve had of umpiring previously has always been poor because they’ve had to do it themselves for their own club. So let’s say a 40 year old goes out as a captain of the seconds or thirds and he gets out early, You can’t turn around and say to the young man who’s 16, go out and umpire for 15 overs!

“He usually takes on the coat and goes himself and does it. Now that’s the hardest job in the world is umpiring your own. If I took that individual out with some knowledge out and put him into a game that he had no connections with at all, he would really enjoy it. And that’s been proved a fact. If you’re not doing your own and you have no connection with either the two teams, and you’ve gone through the courses, and got a wee bit more knowledge and confidence, you’ll really enjoy it. Those who dip their toe in that way, you nearly have them for life.

“And maybe some of the games that they’ve come from themselves - remember they’re still players - might contain a fair bit of indiscipline; and they perhaps would not want to be in a decision making situation where they had to make decisions about indiscipline. Why would they have the hassle?

“It’s better to have six or eight, and hope that five continue on. Last year we had five or six from the North but four of them did 84 games.” So why did he decide to become an umpire in the first place:

“I really enjoyed the game, and not being active in the middle, walking around the ground didn’t suit me whatsoever. I still wanted to be putting something back into the game if I could, and the best seat in the house is without a shadow of a doubt out in the middle. You can be a long time sitting on the settee, but if you’re still able to put something back into the game and the game benefits from what, you know it’d be scandalous not to put it back.

“The beauty about having played at a good level is, you had the respect of the players when you went into the game as an umpire, so you weren’t exactly on the bottom rung of the ladder. You were able to move up because you had a good relationship with a lot of the players that you would be umpiring. Putting something back into the game was fantastic. I really enjoyed it. The umpiring in particular kept you the thick of the action.

“When I was 50-52, I was both playing and umpiring, but it was very difficult to do both roles well, because you could have been playing against a team on a Saturday and maybe umpiring the same team again on the Sunday. There was lots of headaches, so I decided to finish playing and concentrate on umpiring. Don’t get me wrong, I really enjoyed playing, but if I’d realised the opportunities that were available to me I think I’d like to have got into the umpiring a bit earlier. But then of course, who knows, I’m mightn’t have got to where I wanted to go to.”

The most important thing to remember is:

Alan was named on the ICC Associate & Affiliate Panel of International Umpires in 2016, an honour that he was delighted to have achieved:

“From early on in umpiring the posts kept moving. You wanted to be in the elite in Europe, then you wanted to get into the affiliate associates panel, and then you wanted if possible, to get on the international panel. So it just kept snowballing. It doesn’t come without a lot of hard work.

“The panels are hard to get into and easy to get out of. It only takes a few hiccups, a few slip-ups, some bad preparation along the way. But getting on the international panel was just an absolute dream come true. It was something that if somebody had said to me 15 years ago as I set out, that I could be an international umpire, I would’ve put his shirt on back to front and took him away. You would think he’d lost his marbles. But if you set your target high enough it is possible.” According to Alan, Irish umpires are very highly thought of, especially in Europe:

“We’ve had the opportunity in the last couple of years to be able to send up and coming up umpires to European tournaments. And, without a shadow of a doubt they, out of eight or nine umpires that are at those venues, will be in the top two every time. They get tested very well at home, so whenever they go away to a situation or a scenario, they’re extremely well equipped and nothing fazes them.”
So, any advice to new umpires staring out:

“I always say - when you’re standing with somebody, pick out the good points. One might be very good at team management. Take on board that. You’ll see other umpires doing things that maybe you’ll think, ‘I don’t think I’ll include that in my portfolio. So you gather little snippets from the good examples you see.

“Our job as umpires is to facilitate the enjoyment of the game for the players. It’s their game. We are only there to help. And occasionally they ask us to make decisions. We respect them, but they have to respect our decisions. It’s not a case of us going out there to be Mr. Big in the middle. It’s a matter of going out and working with them, gaining their respect. You give them respect, and you’ll get it back off them in most cases.”

Umpiring is a great activity for women and men alike.

Here’s what you can do.

Stage One of the free course (see dates below) will see candidates complete four modules (over four different nights from 7-9pm). It involves two tutors per night doing about 45 minutes each. There’s time allotted per night for questions to come in, and a little bit of storytelling. Anyone who wants to go on and eventually stand as an umpire will have to do Stage Two as well.

Stage Two will take place indoor in a classroom situation. That’s a one day course; if doing the course when it takes place in Dublin it’s over two days.

After Umpires have successfully completed Stage Two and have been recommended by their mentor for going forward, they can then embark upon the various components of Stage Three.

Stage Three has four components to it:

Stage Two will be held on Sunday 29 January at Pavilion, Stormont.

For those in the North West Cricket Union, the Stage One Umpire Training courses will be held on Thursday 16th, Tuesday 21st, Thursday 23rd and Tuesday 28th of February. These courses will also be held over Zoom.

Stage Two will be a One-Day course and will be held in the White Horse Hotel, Derry on either the 4th or 5th of March (date to be confirmed shortly).

For those in the Leinster region, Stage One takes place on Saturday 28th and Sunday 29th of January at Clontarf Cricket Club.

If interested in trying your hand at umpiring, or just want to know more about what’s involved, please contact Alan Neill - details available at: www.niacus.co.uk/training23.html.