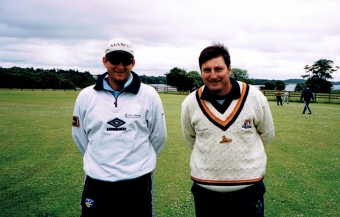 MULLINGAR - Next month it will 20 years since Australian cricket legend Mark Waugh played two matches for Ireland - and during his time in Ireland he visited a number of regional cricket clubs, including Mullingar. Former President of Cricket Leinster Roland Bradley takes up the story.

It is twenty years since Mark Waugh became the 629th man to play for Ireland. The Australian cricketer came over as part of a promotional initiative by the Irish Cricket Union (now Cricket Ireland) and paid for by Tony O’Reilly’s Independent Newspapers.

He played in two games against Zimbabwe in June 2000, scoring 38 and 17, but also visited several clubs around the island, including a visit to the midlands and Mullingar CC.

This leg was organised by the president of the ICU, and took in the natural home of the Midland Cricket Association – Mount Murray, home of Alan Murray, on a beautiful sunny Sunday.

Unfortunately, Mount Murray no longer exists as a cricket ground. For those of us who were lucky enough to have played there, it was one of the most picturesque grounds in Ireland, situated in front of the main house with a Ha-Ha doubling as a sitting area giving a perfect viewing of the grounds with Lough Owel in the background.

The Midland Cup final was usually played at Mount Murray as was the Leprechauns annual visit to the region.

Alf Masood took a liking to the Midland bowlers on one occasion, hitting the biggest six many of us had ever seen which cleared the large oak on the driveway.

At the time of the Waugh visit, the Midland Cricket Association was separate to the South East Association, even though several clubs played in both competitions. Ballyeighan “did the double” on a number of occasions by winning both cups while Laois did it once. During his time as Secretary of the SEA, Niall McConnell decided to amalgamate the two. For this reason only clubs from the midlands were invited and there was an emphasis on the younger players. There more than 100 attendees for the clinic which was to take some two hours followed by a hot and cold buffet. Alan Murray always had the place looking immaculate and pulled out all the stops for this special day.
Our visitors arrived more or less on time but gave the impression of a lack of enthusiasm for what was probably just another PR job that had to be completed.

The assembled were split in groups with Mark and Ireland coach Ken Rutherford giving their expertise on the various disciplines. We were lucky to have a day that allowed the accompanying ladies to top up their tans.

After the allotted time I was approached by some of the younger lads to ask Mark would he put on the pads. I duly obliged and he walked out to the pitch which Alan Murray had lovingly prepared. He turned and announced to Alan and me: “I am not going to bat on that”.

Poor Alan was highly insulted but too much of a gentleman to react so we retired gracefully.

Ten minutes later I saw Mark putting on the pads – Graham Kenny knew Mark’s Achilles heel was a love of horses and charmed him into it. He batted for a long time, dispatching the finest of the Midland attack to many parts of the surrounding fields. To the best of my memory, Tom Carroll can always boast he was the only one to take the wicket of the man who scored 8,000 Test runs.

We ended up with a most memorable day and our guests were in no hurry to leave the most pleasant surroundings. They were made very welcome with a few beers to quench the thirsty work. We have had many wonderful days in Midlands and South East cricket but this was one of the very best.