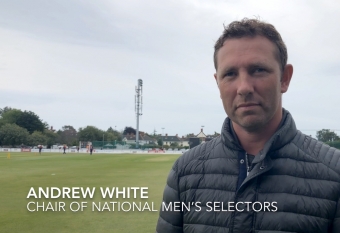 DUBLIN – Cricket Ireland’s Chair of National Men’s Selectors, Andrew White, has been impressed with what he has seen at the Test Triangle Inter-Provincial T20 Festival over the weekend, and believes it points upwards for the national team as it heads into an important six months that culminates in a World Cup Qualifier campaign.

White, appointed Chair of Selectors in 2017, has been closely observing the weekend’s matches, starting with the Leinster Lightning versus Middlesex friendly on Friday night, then the three matches to date as part of the Test Triangle Inter-Provincial T20 Festival.

For the former international who was capped 232 for Ireland and retiring in 2014, White believes the importance of this weekend goes far beyond the immediate challenge for Irish players in the inter-provincial arena, but is a crucial part of the build-up for the next six months, which ends with a world cup qualifying campaign.

Speaking at Pembroke Cricket Club, where the T20 Festival is being held, he said:

“It’s an important period coming up. Obviously the Ireland Wolves play Zimbabwe on Saturday 29th at Eglinton which is another great opportunity for the Wolves players who will be chomping at the bit to get another win over a Test-playing nation after beating Bangladesh earlier on in the year. Then there’s the International series - three one-dayers and three T20Is.”

“Then there is the big one at the end of the year, the T20 World Cup qualifier which is obviously massively important. The timing of this Festival in Pembroke has been excellent. It is a brilliant way of getting a look at players across three good days of cricket. With Zimbabwe coming over in the next couple of days, the Festival is allowing the players to get their skills in operation, and we’ve seen some excellent performances to date.”

Asked what the Festival has given the selectors, he said:

“It’s threefold really. For the guys in the T20 squad it gives them an opportunity to put in some performances and gain confidence going into the series with Zimbabwe. But we’re also looking for some of the fringe players and Wolves players to kick on and put their name in the hat for selection. Then, of course, you’re looking to unearth some gems through some outstanding performances that will hopefully give us a few selection headaches for the period coming up.”

“I think, taking into account the Leinster v Middlesex game on Friday night – which was a great spectacle – there have been some good performances there. Gareth Delany has shown us his all-round capabilities over the weekend. Kevin [O’Brien] played a great innings yesterday and even here today Greg Thompson and Mark Adair putting on 60-odd in four overs – on the whole it’s been really good - and a great way to showcase the T20 format.”


Full fixture details here. Tickets are on sale through Ticketmaster now or at the gate.