Will Smale reports back from Australia 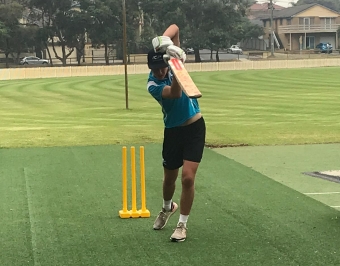 Will Smale training with the ICP team in Sydney

SYDNEY, Australia - Every winter in Ireland a number of Irish cricketers head abroad to play club cricket in the southern hemisphere. Working with the ICP (International Cricket Programme), 18-year old Will Smale is spending some time Down Under attached to Sydney Cricket Club.

Part of the Shapoorji Pallonji Cricket Ireland Academy, Will played in the Ireland Under-19s and North West Warriors this year. He recently updated us on his Australian stint:

“I have been in Sydney for nearly two months now and as we are entering week six of the ICP (International Cricket Programme) - it is a perfect time to reflect on how things have gone in the first half of the programme. Undoubtedly, coming to the other side of the world to play cricket is a big decision and one I was deliberating for a long time. I was lucky enough to get offered this opportunity through Cricket Ireland, with whom I have played Under-19 and first-class cricket. They put me in contact with Howard Grice (Gricey), who is the ICP Programme Director. It was clear before even meeting Gricey how much he is focused on improving any player that comes on the programme, no matter what your level of cricket, and the amount of hard work and effort that goes into the programme clearly shows that.”

“I arrived in Sydney about two weeks before the ICP started, which allowed me to explore Sydney and get over the jet lag. Not only had I achieved both of these things before we started, but I had also met some of the other boys on the programme, many of whom I had played against back at home without realising. Also, I had settled into my accommodation at Warrane College at UNSW, which was to be my home for the next 10 weeks.”

“For me, this was an ideal fit, the college has a great community feel with everyone knowing each other and to be in such a great location in the city is perfect. Finally, Gricey had placed me with Sydney CC in the Drummoyne area of the city. Sydney has been an unbelievable club so far, with probably some of the best facilities in the area, consistently used by the New South Wales state squad. The boys at the club along with Michael Haire, the Director of Cricket, have been so welcoming and my time so far playing Grade Cricket and Poidevin-Gray Shield (U21’s) has been a great experience of how Australians play cricket so differently from us at home.” Image: Will training in the nets with Sydney Cricket Club

“Once the programme starts, you constantly have something to do whether that be netting, gym work, sprinting, physio, recovery or specialist skill sessions with seam, spin, fielding and wicketkeeping coaches. On a Monday, you have an all-morning session where two groups split between group batting sessions, where you work on a range of situations from short balls, to spin options or any particular area you may have struggled during the weekend and the other half have a sprint session with two specialist coaches Roger and Jack, who have worked with David Warner and Sonny Bill Williams.”

“The afternoon off is much needed as you are just starting the week especially if you had two games on the weekend. Tuesday’s start with one group working in the UNSW gym, with S&C coaches who build an individual programme for you, and the other group in Kensington Physio also on the UNSW campus. Gym programmes are also done twice a week.”

“The afternoon consists of a 1:1 batting session with Gricey, a number of assistant coaches who play grade cricket in Sydney and for us, this year, Mark Stoneman of Surrey CCC and formerly England. These sessions are open to whatever you want to work on whether that be spin, seam, white ball or an area you wish to strengthen. Gricey and the other coaches are completely flexible and open to making the session whatever you need so that what you return home next April, you are an improved player.”

“Wednesday is a busy morning - we have a full morning of rotations between different specialist skills along with everyone taking part in fielding. For me being a wicketkeeper, having specialist sessions with Dave Dawson, former NSW and Tasmania ‘keeper, allows me to discuss areas of improvement and to most importantly catch balls in a specialist environment. Thursday mornings are the opposite rotation to Tuesday mornings and, to keep the programme changing, at times Gricey will run pool recovery sessions or we will have early morning beach runs at Coogee, Bronte or Bondi as the sun rises.”

“Friday’s are the time for an optional hit. This is the day before game day and many players choose to come in and focus less on technique but more about getting in shape for the games that lie ahead on the weekend. I regularly use these sessions as it is a great way to feel in good touch going into a game on Saturday and Sunday.”

“The experience I have had to date from coming to Sydney and the ICP for the winter is incredible. I am playing around some great players, both at my club and with the boys on the programme and have already made some great memories with new friends. The opportunity to work on my game in the sun and heat, to give myself every opportunity to feel prepared for the season when I return to Ireland in a few months time is one that I am seizing. I am learning so much from the focused training programme and the experience of playing cricket in such a professional environment – so far it has been a fantastic way for me to continue to develop my game in all aspects of skill, fitness and strategy. I am looking forward to continuing this learning over the next 4 weeks.