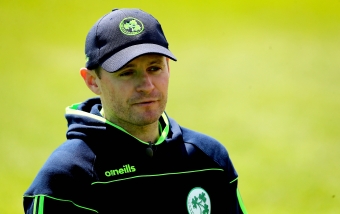 “I’m delighted that we have not only appointed these two roles we have long sought, but to have appointed two world-class players like William and Gary represents a real win for Irish cricket and the players in our performance system. They will have a great opportunity to work with senior men’s and senior women’s squads, as well as with our emerging players in the talent pathway and make a real difference.”

“Indeed, for any young player to be able to access and learn from two of the best players Ireland has produced is an immense opportunity. I know both William and Gary have a passion for Irish cricket and are keen to help develop and improve Irish cricketers at all levels. I wish them well, but know they need no additional motivation – they are two of the most self-motivated people I have worked with and I look forward to seeing their work in this new capacity.”

William Porterfield, current centrally-contracted player and former international captain, has today been appointed as a Consultant Fielding Coach for Ireland. He will work across senior men’s and women’s teams, and will additionally work within the national pathway system. This new role will be combined with his playing role within the senior squad.

Porterfield has concurrently been appointed by the North West Cricket Union as Assistant Coach with the North West Warriors, working alongside newly appointed Head Coach, Gary Wilson. This role will also involve working with the Emerging Warriors squad and pathway players in the NWCU. Similar to his national coaching role, Porterfield will combine these provincial coaching duties with his existing playing role with the Warriors.

“I’m really excited about these two roles – both working within the national system and within the provincial system in the North West. I had a bit of a taste of coaching with the Birmingham Bears last year, and am looking forward to working with some of Ireland’s most talented players – being able to pass on knowledge and experience from a coach’s perspective. It will be a bit different being a coach while still playing, but it’s going to be a great opportunity and I can’t wait to get stuck in.”

“The fielding role with Ireland is something I’m passionate about. I’ve prided myself on my fielding throughout my career, and tried to set high standards, so hopefully I’ll be able to help not only players from the senior men’s and women’s squads, but players from the under-age teams as well.”

“The role, though, isn’t pigeon-holing me as just a fielding coach, I’ll certainly help out generally around the squads where I’m asked – which will give me not only direct coaching experience, but also myself being able to learn from the likes of Graham Ford, Stuart Barnes and Ben Smith, particularly on how to get things across to players. It’s great being able to impart knowledge, but knowing how to deliver a message and knowing the right time is important. Hopefully I can make a difference across the Irish set-up – both men’s and women’s.”

“I’m also looking forward to getting stuck in at the Warriors. Working with Wils [Gary Wilson] on the planning and training - and maybe to help take a bit of the burden off his shoulders - will be fantastic.”

After his retirement from professional cricket last week - and his subsequent appointment as Head Coach of the North West Warriors - Gary Wilson has today been appointed as a Consultant Wicket-Keeping Coach for Ireland, working across senior men’s and women’s teams, and will additionally work within the national pathway system.

“I’m thrilled to be able to support keepers up and down the Irish pathway in this new role. It’s a great opportunity to get back involved in the international set-up so soon after retirement, and it’s a role I’m looking forward to massively.”

“When I was initially discussing the scope of the role, what I really felt added to it was the ability to share my knowledge and experience with the keepers within the women’s game. Ed [Joyce] has been doing such a fantastic job as Head Coach, and I’m delighted to be able to work with him on bringing on the senior and emerging talent that we have here in Ireland.”