Wilson & Porterfield ready to get on their bikes 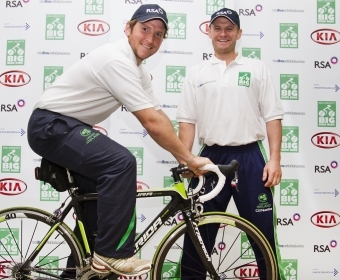 The boys are nearly set to go © Rob O'Connor/Rocshot

Irish cricket team mates Gary Wilson and William Porterfield are getting on their bikes for an ambitious project to cycle the length of Ireland - a grand total of 380 miles in just five days!

Neither has any significant cycling experience - indeed Irish captain Porterfield was one of those unusual kids growing up who never rode a bicycle. He was probably otherwise occupied playing cricket!

But now at the age of 28 has been trying to perfect his balance on two wheels - all in the aid of charity.
He has agreed to join close friend Gary Wilson on the sponsored ride in aid of Cancer Research UK, all in memory of Gary’s mother Iris who died earlier this year.

Over the past few months - even during the World Twenty Cup in Sri Lanka - Porterfield has been hopping on a bicycle whenever he can.

“I was just one of those things that I never really rode a bicycle when I was young”, he says. “But I’ve now put in a few miles and, with a bit of luck, should be alright.”

The “off” will be in Cork on Tuesday (October 9) and the journey over five days will take them to Belfast through Kilkenny (overnight Tuesday), Malahide (overnight Wednesday) Armagh (overnight Thursday) and Derry/Londonderry (overnight Friday). At the end of the marathon, the cyclists will be met on Saturday at Belfast City Hall by the Lord Mayor, Alderman Gavin Robinson.

Gary Wilson has a message for everyone.

Wish us well - my Irish skipper William Porterfield and I are on our bikes on Tuesday (October 9) for our Big Charity Ride. We set out from Cork and will travel via Kilkenny (overnight Tuesday), Malahide (overnight Wednesday), Armagh (overnight Thursday), Derry/Londonderry (overnight Friday) and finally to Belfast where the Lord Mayor will meet us late on Saturday afternoon. It will be tough going, all 380 miles of them, but it’s all in a good cause: Cancer Research in memory of my mum who passed away earlier in the year. The charity drive will climax with a dinner at Belfast Europa on Saturday night (October 13) and William and I would like to thank those who will be attending.

By the way, there’s still room and if anyone would like to attend I can be contacted on gcw75@msn.com.

And cricket lovers might be interested in one of our star auction items. It’s admission for two at any/all England and Surrey games at the Kia Oval next summer and that includes the 5th Ashes Test from Wednesday August 21-25 and two T20 games against New Zealand in June. All games will be viewed from the Kennington Club in the Laker Stand Club at the Oval which will have its own bar and lounge where refreshments are available to be purchased.  I’m happy to take auction bids from those not attending the dinner. You could be a winner - but bear in mind the two memberships are highly prized. One membership alone costs £1450+VAT, with the majority of value being in the Test Match tickets. As I say, wish us well - and thank you for your support.