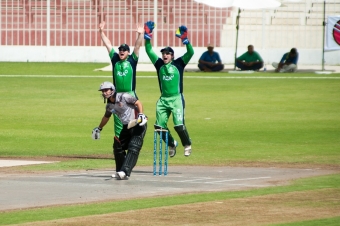 Gary Wilson settled Irish nerves scoring an unbeaten half century to lead his team to a five wicket win against the United Arab Emirates in the first of their two World Cup Qualifiers.

Chasing a modest UAE total of 165, Ireland suffered an early innings wobble. The much vaunted quartet of Paul Stirling, William Porterfield, Ed Joyce and Niall O’Brien all fell early, as 27 without loss deteriorated into 51 for 4, with the Emirati bowlers and Nasir Aziz in particular scenting blood.

Wilson, in crucial partnerships first with Kevin O’Brien and then with John Mooney blunted the UAE attack, which in truth wasn’t supported by their ground fielding, which on numerous occasions was found severely lacking.

The UAE had earlier been restricted to just 165 as the Irish bowlers and fielders turned in a typically athletic dispplay.

The introduction of George Dockrell (2-15) saw the Somerset left-arm spinner pick up two wickets in his first over, and the UAE were reeling on 38 for 3. That became 39 for 4 as Paul Stirling’s first delivery accounted for last week’s centurion Khurram Khan.

Swapnil Patil benefitted from two missed opportunities as he top scored for the home side with 65 from 91 balls (3 fours), sharing in a 5th wicket stand of 69 with Shaiman Anwar (35).

Cusack (3-21)  who had suffered a finger injury while attempting a return catch from Patil, got his revenge - his slower ball leaving the batsman stranded out of his crease presenting wicket-keeper Wilson with the simplest of stumping chances.

Ireland will be hoping that the results of an x-ray are favourable, as the Clontarf all-rounder as been a key figure in helping his team to the summit of the qualification table.

Gary Wilson said the Irish weren’t guilty of overconfidence in pursuit of their modest target: “I wouldn’t say it was job done at the innings break but we knew we were in a good position. We won comfortably enough in the end up but we perhaps made slightly harder work of it than we should have.”

Many thanks for all your tweets. 2 points in the bag!

On the impact of Nasir Aziz who dismissed Porterfield (19), Joyce(12) and Kevin O’Brien (18) to finish with the excellent analysis of 3 for 26, the Surrey wicket-keeper batsman said: “If we had got a slightly better start then it would have different, asI don’t think he would have made such an impact. I read him okay but there’s no doubt he bowled well today.”

It’s been a successful tour so far for the 27 year-old, who scored 82 last week in the drawn four-day match: “It’s nice to get a not out but more importantly it’s nice to get a win. That’s a big step today and if we can get another win on Wednesday then we’re very close to qualification for Australia.”

On the partnership with Kevin O’Brien which repaired the early damage, Wilson outlined the Irish strategy: “We still wanted to play attacking cricket. It was slightly difficult because they had the field up so it was difficult to milk the singles.”

North County all-rounder John Mooney was upbeat after the win was secured: “We’ve just discussed the game in the changing room and William (Porterfield) and Paul Stirling have accepted responsibility for putting us in a bit of a hole.”

“We fought back brilliantly and showed our strength in depth. We bat the whole way down and we’d back ourselves no matter what the situation.

“Kevin O’Brien and Willo (Gary Wilson) did a fantastic job settling things down and after the first drinks break they got a few runs in a hurry and that changed the mood in the dressing room - you could feel the pressure lifting. We have a lot of caps in the middle order and that really showed today.”

Mooney, who was in the middle when Ireland beat England in the 2011 World Cup, outlined the importance of the win which puts Ireland four points clear at the top of the qualification table: “You can’t beat England in a World Cup without winning these games here, so it’s every bit as important.

“TJ (Trent Johnston) was just class up front - I don’t know how he keeps going. While it maybe wasn’t one of Max Sorensen’s better days, the rest of the attack kept it simple and bowled to their fields and our plans.”

Ireland face the UAE on Wednesday at the same venue, where a win would open up a sizeable six-point gap over their nearest challengers Scotland and Afghanistan with just four matches to play in the round-robin competition.

The top two gain automatic qualification for the 2015 World Cup in Australia, with the other six playing in a further qualifying tournament with the top four from World League Division Two in New Zealand early next year.