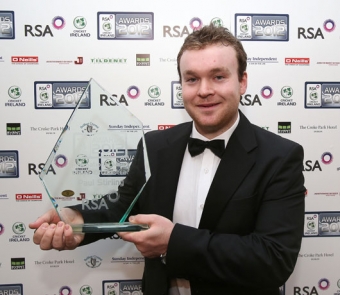 Paul Stirling has been named as Ireland’s RSA International Men’s Player of the Year at the inaugural RSA Cricket Ireland Awards. The 22 year old Middlesex all-rounder beat off the challenge of fellow Ireland stars George Dockrell and Ed Joyce to lift the top prize in front of 300 players, officials and guests at the Round Room at the Mansion House.

Clare Shillington completed a memorable season by being named the RSA International Women’s Player of the Year ahead of Kim Garth and Cecelia Joyce. Shillington became the first Irish woman to reach the 100 caps milestone, and her century against The Netherlands was the first by an Irish player for 14 years.

Ireland Under 19 star Tyrone Kane was named the Croke Park Hotel Junior Player of the Year for his performances in the World Cup in Australia, where he averaged 49.

Donemana were named the Tildenet Club of the Year for their magnificent campaign which saw the club pick up trophies at all levels, with the highlights being the senior team completing a domestic treble, and their Under 15’s collecting the All Ireland Cup.

There was further good news for the North West as Brigade all-rounder Johnny Thompson capped a magnificent personal campaign by winning his third major award in recent weeks by being named the O’Neills Club Player of the Year.

John Wills was a deserved winner of the Eventcentre Coach of the Year award in recognition of his work with The Hills, who under his expert guidance won the most sought after trophy in Irish cricket, the Bob Kerr Irish Senior Cup, for the first time.

Aideen Rice of YMCA was an extremely popular winner of the Johnston, Mooney & O’Brien Vounteer of the Year award for her sterling work at the Claremont Road club, particularly in the areas of youth and women’s cricket.

RSA’s CEO Philip Smith said: “On behalf of everyone at RSA Insurance, I say congratulations and well done to all of the award nominees and winners. It’s a proud night for Irish Cricket and for the growing number of players, officials and volunteers from across the country who have generated tremendous momentum for the sport on the domestic and international stages. RSA is proud to partner with you and support your continued success.”

The full list of award winners is as follows: