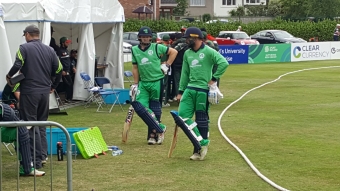 The Ireland Wolves fell to a four-wicket defeat against Bangladesh A in the first of three T20s in Clontarf on Monday, despite Simi Singh’s 41 and Andy McBrine’s 3-23.

Stuart Thompson got the Wolves’ innings off to a positive start with 28 runs off 19 balls (4 x fours). When he fell just after the powerplay finished however, the Wolves were 52-3 and looking to rebuild.

Simi Singh provided the impetus required, with his 41 runs (37 balls; 1 x four, 2 x sixes) anchoring the innings. A cameo innings by Kevin O’Brien (21 runs off 12 balls) helped push the score beyond 150, despite losing four wickets in the last 12 deliveries of the innings.

With 153 the target for Bangladesh A, Andy McBrine got Ireland’s defence off to the perfect start bowling Zakir Hasan first ball. Incoming T20 captain, Soumya Sarkar (57 runs off 41 balls; 5 x fours, 3 x sixes), steadied the Bangladesh ship, putting on 62 with Nozmul Hossain (38) in less than eight overs for the second wicket.

McBrine was brought back into the attack and almost immediately claimed two wickets in his final two overs to finish with 3-23, with Singh bowling a remarkably economical spell at the same time - his four overs costing just 12 runs.

Despite this good spell in the middle overs, Bangladesh A and Afif Hossain (35 runs off 21 balls) in particular, were able to steer the visitors towards their target, with the winning runs being hit off the last ball of the 18th over.

The sides meet again for Game 2 in Clontarf on Wednesday at 4pm.

Bangladesh A win by 4 wickets