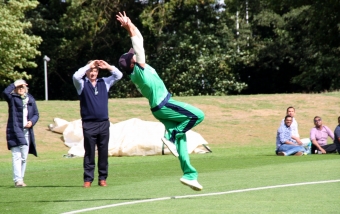 The Ireland Wolves levelled the three-match series against Bangladesh A with an emphatic albeit rain-affected T20 at Malahide Cricket Club.

Bangladesh won the toss and chose to bowl first, and from the outset the decision looked the wrong decision.

Short cameos by Simi Singh (12) and Andrew Balbirnie (18) ensured the Ireland Wolves innings maintained a 10-run per over run rate, and finished on 202-6 from their 20 overs.

With the resumption of play delayed slightly due to a rain shower, the Wolves bowlers gathered themselves to defend the total.

After a sprightly 24-run opening stand between Mohammad Showrab (14) and Soumya Sarker (11), Andy McBrine (2-25) struck twice in the fifth over, which instigated a top order collapse.

Bangladesh lost 7-48 in just under 10 overs, with David Delany claiming two wickets (2-15) and the run chase was effectively over.

The undoubted highlight of the innings however was not a bowling effort, but a sensational outfield catch. With the score on 57-5, left-handed Bangladeshi batsman Dhrubo hoisted Barry McCarthy high and long towards deep mid-wicket. Stuart Thompson ran back and caught the ball above his head, however with his momentum about to carry him over the boundary rope, Thompson flicked the ball back into the field of play where team-mate Gareth Delany came running forward to claim a one-handed running catch.

The ball is hit high to the deep mid-wicket boundary. @SRThompson91 leaps high and knocks it back into the field of play for an incoming Gareth Delany to claim it one handed. Not bad lads, not bad. #BackingGreen pic.twitter.com/4WPY9fC9fd

With the score on 104-7 after 15 overs, the heavens opened and the remainder of the match was rained off, with the Wolves declared winners by 51 runs under the DLS method.

The sides meet again for Game 3 in Malahide on Friday at 4pm.