Wolves fall short in high-scoring encounter against Bangladesh A 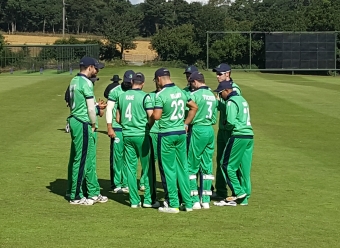 The Ireland Wolves fell to an 85-run defeat against Bangladesh A, despite a century from skipper Andrew Balbirnie and a half-century from Simi Singh. Bangladesh A lead the series 2-1 with one match to go.

After winning the toss and choosing to bat, then losing Rahman early, Bangladesh captain Mominul Haque (182 off 133 balls; 27 x fours, 3 x sixes) took control alongside the other opener, Zakir Hasan.

Haque’s array of shots all around the ground and display of technical skill saw him pick the gaps consistently, although it was with a little luck at times. Haque shared in a partnership of 210 with Hasan (79 runs; 7 x fours, 2 x sixes).

Andrew Balbirnie speaking after the game said: “The skipper batted really well throughout. Although we maybe didn’t get the luck he did, that’s the way it goes sometimes. Tyrone [Kane] was nailing his wide yorkers and [Haque] was able to squirt a few away into the gaps.”

Only Andy McBrine (1-45 off 10 overs) was spared an economy rate of eight or higher as Haque and Hasan relentlessly attacked.

Even two rain delays couldn’t break their momentum, and when David Delany finally broke the partnership trapping Hasan leg before wicket, Haque regrouped and added a further 112 for the next wicket with Mohammad Mithun (87*).

Mithun was the quickest to fifty of three Bangladesh players taking just 34 deliveries and he added extra impetus in the final ten overs. All told 127 runs were added in those last 60 deliveries ensuring the Wolves would have to chase a mammoth total of 386-4.

“I can’t fault the effort,” Balbirnie said. “But there are a few areas we can work on with the ball. On pitches like this we’ve got to bowl more accurately, more at the stumps. These guys are learning fast. Andy McBrine was superb today - he maybe won’t get the plaudits, but to only go for 45 on a day like today is incredible.”

In response - after the early loss of James Shannon - James McCollum (43) and Balbirnie looked to be guiding the Wolves safely, and quickly through the early overs. McCollum replicating his stunning club form with seven boundaries and a six in his innings before being undone by the left-arm spin of Rabbi.

Balbirnie and Stuart Thompson then combined for a 77-run partnership in 11 overs as the Wolves kept up with the run rate required. Balbirnie was manoeuvring the field at will. In consecutive balls he pulled through square leg, then drove in front of square after the fielder had been moved to cover the pull.

Just after passing his well-deserved century (off 105 balls) Balbirnie was caught at mid-off and his 93-run partnership with Simi Singh was broken, the Wolves 233-4 with 13 overs remaining.

Singh was bowled for 53, after sweeping consecutive sixes, leaving the Wolves at 258-5. Any chance of the lower order pulling off a remarkable run chase ended when three further wickets fell in five balls shortly after with the score on 279, with the tail wrapped up with the score at 301.

“We’ve a really big game on Friday. If we can come out of this series with a two-all then that will be great. We’ve a lot of guys in good form at the moment. Thompson and McCollum look in great nick and obviously McBrine with the ball.”

Bangladesh A win by 85 runs