Wolves go down with a tail-end fight 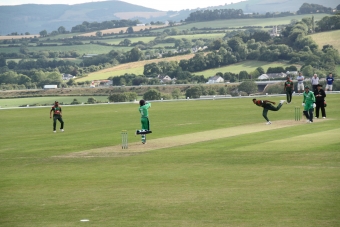 Despite a valiant tail-end flourish led by Ireland Wolves’ Tyrone Kane, Bangladesh A have finished comfortable winners in the second 50-over match at Oak Hill Cricket Club today.

Under grey skies, Wolves captain Andrew Balbirnie won the toss and elected to bowl first. Despite a green tinge to the pitch, the opening batsmen looked comfortable from the outset. Openers Zakir Hasan (92 from 92 balls; 8 x fours, 3 x sixes) and Saif Hasan (37 from 74 balls; 4 x fours) putting on 139 for the first wicket in 25 overs.

Wolves paceman Peter Chase, after conceding more than six runs an over in his first spell, hit back in his second spell removing both openers – first, having Saif Hasan caught in the outfield by David Delany, then inducing Zakir Hasan to play the ball on in the shadow of what would have been a well-deserved century.

Tyrone Kane then claimed two further wickets, which in combination with tight bowling at the other end from Delany and JJ Garth, pulled back the Bangladesh A run rate and had them at 200-4 in the 36th over.

In response, the Wolves innings started poorly losing three early wickets, with all three falling with the score on 14. The setback of losing the in-form trio of James Shannon, James McCollum and Andrew Balbirnie meant the chasing side was always facing an uphill battle.

Stuart Thompson and Harry Tector sought to stabilise the innings, until Thompson went on 23 (26 balls; 2 x fours, 1 x six) with the Wolves on 41-4 in the 13th over.

Tector (23 off 69 balls) was then joined by Shane Getkate (38 from 50 balls; 2 x fours, 2 x sixes), and the pair put on the best partnership of the innings of 60 runs. However, the two batsmen fell in quick succession to stymie any thoughts of a long-odds victory.

Lorcan Tucker’s 21 (from 27 balls) and Tyrone Kane’s entertaining 49 (40 balls; 3 x fours, 3 x sixes) put some respectability in the final score, however the Wolves were eventually all out for 202.

“I’m happy enough with how I went personally but we didn’t get off to the greatest start with a couple of early dismissals in the first ten. Harry [Tector] and Shane [Getkate] built a good foundation in the middle, which allowed the lower order to come in and play positively. Which is what me and Lorcan Tucker did – we came out together needing 11 or 12 an over, so we just had to back ourselves when the ball was there, and rotate the strike as much as we could.”

“I think we had the best of the conditions bowling-wise, but we didn’t make use of them in the first ten. We came back well in the middle overs, but I think it was the right choice to bowl first in these conditions.”

“There’s a lot to learn there – our fielding let us down slightly, which we’ll work on. Having clear plans with both bat and ball, then executing those plans will make the difference going forward. It’s all well and good having the plans, but if you don’t execute, it’s worth nothing.”

Bangladesh A won by 87 runs