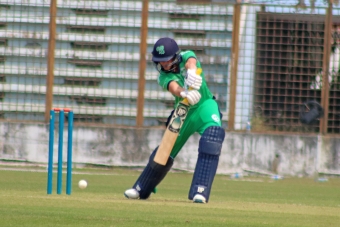 A change in the tour itinerary has been agreed

In the fourth match of the one-day series yesterday (see full scorecard), the Ireland Wolves recovered from being 54-4 to post 182 to give their bowlers something to defend. However, a resilient batting display by the home side saw them home by eight wickets.

“It’s generally been the case over here that in the early morning the ball moves around a bit more – with our first game in Dhaka on a new pitch and being a bit overcast, there were more bowler-friendly conditions yesterday. We recovered well from where we were - the lads did well to get to 182 - but we knew we were up against it with that sort of score.”

“I thought in that second innings that Peter Chase bowled brilliantly – he’s been very consistent this whole trip. He made life difficult for their batters and he was rewarded today, which was fantastic for him. However, in that second innings the pitch flattened out and we didn’t feel that after the new ball shine had gone off that the seamers would trouble the batters as much as the spinners would.”

About Mark Adair’s batting promotion to first drop, he said:

“We promoted Mark up the order to see how he would go with a bit more responsibility – he’s obviously a very talented batter, he’s far more than just a guy who can come in at the end and hit a long ball. The coaching staff and selectors were keen to see him have a go up the order, and I thought he batted beautifully.”

Meanwhile, Cricket Ireland and the Bangladesh Cricket Board have today agreed to a change in the tour itinerary after advice was received from the Irish Government that necessitated a change in travel plans to return home. The itinerary change will result in the Ireland Wolves squad departing Dhaka two days earlier, reducing the T20 leg of the tour by one match.

“While unfortunate that we will be sacrificing one T20, Irish authorities have advised that extensions of quarantining regulations for in-bound passengers to Ireland flying through Category 2 ‘red list’ countries mean a compulsory 14-day hotel quarantine. As our route home was via the UAE, that would mean our squad would be caught up under these regulations – regardless of whether we were stopping over or simply transiting through – so we have had to re-route the players home via another country not on the red-list.”

“We have always said that the mental and physical health and welfare of our squads are our first priority, so avoiding a 14-day hotel quarantine was essential. Given the rigorous bubble conditions these players have already abided by over the last four weeks, the fact that some of the squad would have experienced similar bio-bubbles in the UAE not so long ago, and the possibility that countries could be added to the red-list at any time, we considered the sacrifice of one T20 a reasonable compromise in order to get the squad home as quickly as possible, via a non-category 2 country.”

“We sincerely appreciate the support and understanding of our hosts, the Bangladesh Cricket Board, who agreed readily to the changes and additionally agreed to a change in date of the final T20 fixture in order for both sides to maximise playing time. We are also grateful to our colleagues in Sport Ireland who have maintained frequent contact with us to assist in understanding the practical application of the new regulations.”

The fifth and final one-day match of the series will be played tomorrow morning, while the T20 fixture will be played on Tuesday, before the squad flies out on Wednesday morning.

The upcoming fixtures are: