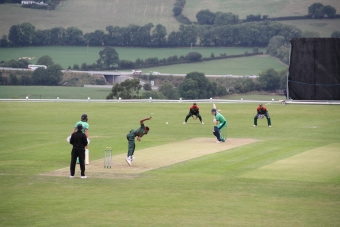 Ireland Wolves tied the series with Bangladesh A with a clinical 34-run victory in Oak Hill today.

After losing the toss and being sent in to bat, the Wolves were quickly on the back foot after losing James Shannon and Harry Tector early. Captain Andrew Balbirnie went on the counterattack but on 27 he feathered a ball through to the keeper leaving the Wolves on 53-3 in the 15th over.

That brought together the partnership of Andy McBrine and Stuart Thompson. The pair put on 103 runs for the 4th wicket, and displayed a combination of nice cuts, pulls and drives to put the Wolves back in the game.

In the 36th over, McBrine smashed a beautiful straight six that brought up the team 150 and followed it up with a boundary pulled behind square that signalled the 100 partnership between himself and Thompson.

McBrine said after the game: “It was nice to get out there with Stuart, to get a fifty and set the game up for the lads at the back end.”

Having laid all the groundwork for a late innings assault, Thompson departed in the following over for 69 (91 balls; 6 x fours, 1 x six) when his shot to wide long-on couldn’t beat the fielder.

With 10 overs to go, the Wolves were 175-4 and in a real sign of intent McBrine pulled a powerful boundary in front of square, however just as the home side looked to press the accelerator McBrine pulled a short ball straight to deep mid-wicket who made no mistake in taking the catch. McBrine’s 58 was from 74 balls, including 5 x fours and 1 x six.

“We would have loved to get to 260 to set a really competitive target,” said McBrine “but we knew at half-time that with 245 we are obviously well in the game.”

The Wolves opened the bowling with Andy McBrine in partnership with Tyrone Kane. Tight bowling put the squeeze on Bangladesh A, but the breakthrough came when Barry McCarthy entered the attack - dismissing batting hero of the last match Zakir Hasan for 8, leaving the batting side at 29-1 after 10 overs.

The visitors batted steadily, but never dominated the Wolves attack like they did in the last match. McBrine (3-37 from 10 overs) and Barry McCarthy (3-37 from 8.3 overs) led the restrictive bowling effort, but it was Tyrone Kane (4-24 from 8 overs) who claimed vital wickets in the middle order and ensured a Wolves victory.

The Wolves claimed the final wicket in the 47th over, dismissing Bangladesh A for 211 and claiming a 34 run victory and levelling the five-match series at 1-1 after three matches.

Speaking after the game, Andy McBrine was delighted with getting the win: “We came really, really close against these boys out in Bangladesh, so we knew we just had to take that one step further and get over the line today.”