Women’s Development side on a learning curve 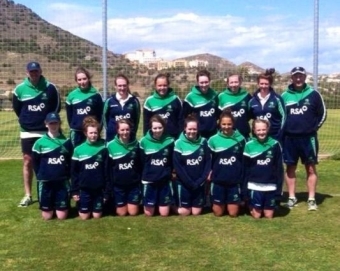 The Ireland Women’s Development selection arrived back from a tough week in La Manga on Thursday night without a win, but it was not a wasted trip.

Opening bowler Louise McCarthy said, “It was great to brush off the cobwebs before the season begins. I really want to hit my straps early on in the season so this was an important step towards that.

“It was a really enjoyable experience. It was inspirational to see the younger girls step up in difficult situations. Some of the fielding from Una Raymond-Hoey was incredible, and the bowling from Robyn Lewis and Lucy O’Reilly, both of whom got three wickets in a match, was so encouraging for the future of Irish cricket.”

Laura Delany captained the side and it was somewhat a baptism of fire for the Leinster all-rounder as this was the first time that many of her players had played in the green of Ireland. “Although the trip was enjoyable it proved testing at times,” she admitted. “We were playing against a very experienced side with some talented players.

“As a player my mental toughness was definitely tested and learning how to separate my own game from being captain is a skill that I’m still learning.”

McCarthy was impressed by a lot of the newcomers to the international scene. “It was nice to see the work ethic of the younger girls,” she added. “And there were promising signs with the ball as was shown when we got Berkshire all out twice, once in T20 and once in 50 overs.”

Batting was clearly the area where the team struggled the most. “There were performances with the bat but generally no more than one player scored well in any one innings, and no player scored consistently over the five matches,” said McCarthy. “The experience wasn’t there with those players. A lot of the girls haven’t played even ladies cricket, they just play against the same bowlers all the time and they weren’t used to the pace or facing more than one spinner in an innings.”

Delany agreed, saying: “As a team we were successful with our bowling and lucky to have a lot of bowlers to choose from. In the batting, though we had some attacking periods, we did not have the strength in depth to challenge their bowling attack.”

Senior squad member Shauna Kavanagh has come back with a confidence she didn’t have before the trip. “It was the best learning experience I’ve had. I’ve been playing cricket for so long and been on a few trips, but this is the one that really stands out for me in terms of learning. For example, I don’t think I’ll ever bat like I did those first two games.

“It’s so important to back your ability but those first few days I was afraid to bat. I was scared of getting out and put too much pressure on myself and ended up not being able to score runs.”

Kavanagh is used to being one of the younger players on the senior squad, so being the oldest player was an entirely new experience. “I have rarely been in the position where I’ve got to be the one to score runs or take wickets, in an Irish shirt anyway, and I don’t think I dealt with it too well in the beginning. But as the trip went on I learned to relax and I took the lead of some of the younger girls who just played with freedom.

“One of the best things about the trip was that there was no pressure on the result. We got the big-match excitement without worrying about promotion in the County Championships or qualifying for a World Cup. It was as close as you can get to pressure-free because there was nothing at stake.”

All three players have come back with renewed confidence that Irish cricket is on the way up. “The way the younger girls carried themselves and their attitude was so good,” said McCarthy. “They’re driven and they just work so hard, it was a pleasure to be around and a breath of fresh air,” agreed Kavanagh.