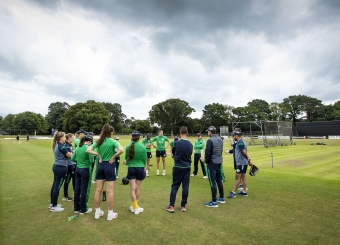 The Performance and Development squads have been named for 2022

DUBLIN – Cricket Ireland has today announced the Women’s Performance Squad and Women’s Development Squad for 2022, with Ireland Women’s head coach Ed Joyce acknowledging there has been a need to further improve the talent pathway now that Ireland has entered the ICC Women’s Championship.

After the conclusion of the recent ICC Women’s World Cup Global Qualifier it was confirmed that Ireland Women would qualify for the ICC Women’s Championship for the first time. Similar to the men’s Future Tours Programme, the Women’s Championship guarantees participating teams regular fixtures against high-ranked opponents in women’s cricket over a four-year cycle.

A number of the changes in 2022 build upon work already started on evolving the women’s high performance programme to meet the needs of the national team in future years. The new changes include:

• Reflecting the change in philosophy to the developmental or emerging talent programme through renaming the ‘Academy Squad’ to ‘Development Squad’;

• Refocussing the selection process and profile of the Development Squad to proactively seek to produce specific skill-sets required for the national team in future years;

• Appointing a Head Coach for the Development Squad;

• Organising a programme of competitive fixtures annually for the Development Squad; and

“It has been an enjoyable couple of years for me coaching the national women’s team. The pandemic has, of course, created challenges around the training and playing programme, but the commitment and ambition of the group has been incredible. The players should take a huge amount of credit for their attitude during this period. I’d also personally like to thank the management team for their support and energy. It’s a fun and committed group to be around, which is doubly important when dealing with ‘bubbles’ and ‘managed environments’ on tour.

“One of our main aims going forward is to create a slightly deeper pool of players that will help the national team become more competitive on the field, and also feed into the Super Series competition. We need coaching and support services to achieve this, and Cricket Ireland have backed us with the addition of full-time staff – a Physiotherapist, Strength & Conditioning Coach, Team Operations Manager, Assistant Coach, and Performance Analyst.

“We are not finished yet, but gradually we are shaping the pathway to provide for our national needs – and the players are responding. However, the players also know that with increased support and structural improvements comes a greater level of expectation. This, though, I have no doubt they can handle, and am excited to see how far we can take this group as we enter a new phase.

“Below the international layer, we have made a change in the structure and emphasis of what was previously known as the ‘Academy Squad’ for 2022. It has been renamed as the ‘Development Squad’ as part of our shift in focus for our emerging talent, and with a view towards the ICC Under-19s Women’s World Cup in early 2023.

“Glenn Querl will oversee the group as Head Coach, with annual fixtures being organised to provide high-quality competitive experience for the next tier of emerging talent.

“Now that the Super Series teams have their own training sessions before and during the season, this has offered us the opportunity to refine the purpose and profile of the Development Squad. The group will now have a slightly more youthful composition with selection targeting specific skill-sets that we need in Irish women’s cricket for the years ahead.

“While the Development Squad may still feature players with senior international experience who were unlucky to miss out on Performance squad selection, we believe the overall change will support our talent pathway twofold – by increasing depth in the Super Series competition in the short-term, and for the national side in the medium-to-long term.

“Amongst the 2022 squad named, there’s a heavy emphasis on spin bowlers especially, but there are also two wicketkeepers and some exciting all-rounders and pace bowling talent selected. Although some of the talent is quite raw, with a solid and structured training programme, these players will make a lot of progress in 2022.”