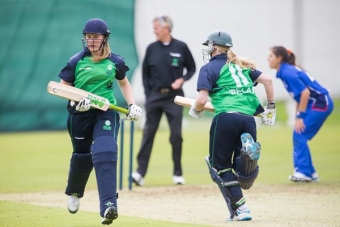 The Irish women’s under 19 team recorded wins in both their T20 matches against Italy in Waringstown on Monday.

In the first match Ireland batted first and a great opening partnership between Hannah Grieve (75) and Leah Paul got the home side off to a great start reaching 130 before Italy finally got the wicket of Paul when she was run out for 46.

The dominance of the Irish batter was clear and Grieve also fell to a run out before Kim Garth, Elena Tice and Naomi Matthews finished off the innings to ensure Ireland reached the impressive 155-3.

Ireland wasted no time in chasing the win with a wicket for captain Kim Garth in the first over before eight different bowlers were used in an outstanding team display. An all round performance from Ireland saw two wickets each for Rachel Delaney, Anna Kerrisson and Katie Boylan, with good fielding leading to two run outs.

It took just 15.2 overs for Ireland to get the visitors all out for just 49 runs with Sophie MacMahon taking the final wicket to ensure Ireland won by 111 runs.

In the second game the Italians batted first with the Irish bowlers carrying their form from the first match to restrict them to 67-7 from their 20 overs.

Ireland were never really troubled during the chase, with a solid betting performance from Una Raymond-Hoey (32*) and Sophie MacMahon (18) seeing them reach the required 69 runs in just 9 overs.

The two sides meet again on Tuesday in a 50-over match at YMCA CC in Dublin.