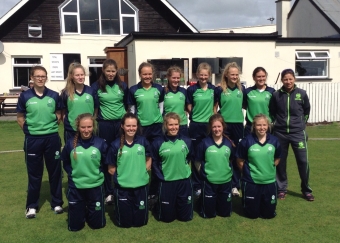 The women’s under 17’s today completed a clean sweep of wins over Scotland in the four match series.

A win and an abandoned match on Monday in Rush set the team up to win the series early on in the week.

A second win at Rush yesterday by 86 runs saw Ireland dominating right from the very start as they won the toss and put up 222 runs in the first innings. Particularly impressive batting from Robyn Lewis (60) and Rebecca Stokell (40) saw a 95 run partnership before Lewis was caught and bowled by Maqsood.

An all round bowling performance saw 6 different bowlers each taking wickets to have Scotland all out for 136 after 37 overs.

The final fixture of the series was a Twenty20 played today in North Kildare which saw Ireland winning by 8 wickets in a game that was brought right to the wire at the end as Ireland reached their victory with only 10 balls to spare.

A fantastic half century from Leah Paul (51*) as well as solid batting performances from captain Anna Kerrison (19) and Robyn Lewis (29*) helped lead Ireland as they chased down Scotland’s 113.

In the first innings Ireland utilised 8 different bowlers as Scotland reached their total for just the loss of two wickets. The Bryce sisters put in big efforts with the bat with Kathryn reaching an unbeaten 54* and Sarah getting 26 runs before being caught by Rebecca Stokell off Natasha Morton’s bowling.