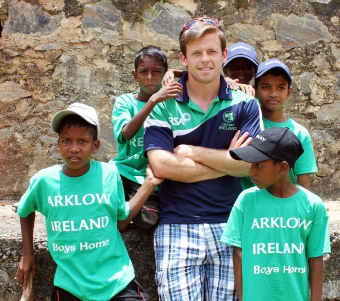 A visit to an orphanage today lifted spirits © Barry Chambers/INPHO

Ed Joyce goes through the days events yesterday in Colombo and gives us his thoughts on the disappointing loss to Australia in Ireland’s first game of the 2012 ICC World Twenty 20.

A cliche you often hear in football is that after you win something - the Premier League for example - you have a target on your back, you’re the team everyone wants to beat. Well, that doesn’t quite apply to us because we haven’t won a major tournament but the scalps we have been consistently taking has finally put us on the radar of the traditionally bigger teams. It probably does put extra pressure on us because everyone knows what we can do now, and now that we are looking for test status as well it means there is definitely a target on our back.

It was obvious to everyone at home that we were copping a lot of stick from the Aussies all game yesterday and it was a bit of a backhanded compliment I suppose - they were basically telling us they weren’t going to underestimate us. We chose to bat first and we knew that if we could get over 150, we could put pressure on them with our slow bowlers and be in with a chance of winning.

The first six overs is crucial for us and up until the Australia game Porterfield and Stirling had done a great job giving us a good start over here. We usually aim to be about 45-1 after the first six but unfortunately, yesterday, we were 35-3 and it’s very hard to win from there - not impossible, but difficult. I think we actually did quite well to get to 123 but it was never going to be enough on that wicket.

The key was to get Warner or Watson early because after that, Australia’s batting looks quite brittle, they might have buckled under the pressure but we didn’t give ourselves a chance with that batting performance.

Although Twenty20 is not the form of the game that I excel most in - I don’t play the short form for my county Sussex - I do enjoy it. I like the crowds, the atmosphere and, of course, the fact that it’s a short game! In the main, we have a team that is suited to Twenty20 because we have a lot of all-rounders as well as big hitters of the ball like Stirlo and Kev.

My favourite thing about playing for Ireland is the pride of representing my country. Putting on that shirt and playing for the shamrock, hearing the anthem for the game, seeing all of our wonderful fans there’s nothing better.

It’s hard to pick yourself up after a loss but today we visited an orphanage about an hour from Colombo called the Arklow boys home. It’s supported by Brian Brennan and people from Arklow in County Wicklow donated money to buy the land for the home and to build the structure. It’s nice to get out when we can and lend our support to charities. Meeting these boys who have no parents kind of puts things into perspective. They don’t care that we lost; they know who we are and they are just so excited to meet us.

TJ (Trent Johnston) calls me the heavy veteran, which I suppose is fair enough now that I’m turning 34 in a couple of days. I am sore today after the match so I guess it’s a good thing that the games are so short. It doesn’t help that this tournament comes at the end of a long County season but the main thing is that my hips are good (I have suffered with injuries in my hips in the past).

We have to forget about yesterday and start looking ahead to the West Indies game. Their biggest threat with the bat? Well, you can’t really look past Chris Gayle. He’s a huge player for them and they’ll want him to score big, but also to bat through the innings. If we were able to get him early it would be massive for us. With the ball, Sunil Narine is probably the one to watch. None of us has played him before and he did very well in the IPL, so we need to figure out how to score off him. If were are going to win our second group game then we need a solid start - whether it’s with the bat or ball - and we must restrict their key players as much as possible.

After the game yesterday we went back to the hotel and had a few beers with the supporters who, as usual, have been brilliant. Some of the guys were quite ill, though, because of something they ate earlier in the afternoon so I was pretty glad I managed to steer clear and was able to get a good night’s sleep in!